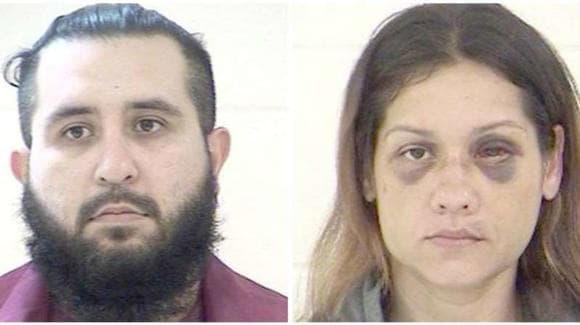 A New Hampshire man is accused of murdering his wife’s male lover and later forcing her to decapitate him to help dispose the body, MTO News has learned.

Authorities issued an arrest warrant for Armando Barron, 30, and Britany Barron, 31, who are charged in the death of 25-year-old Jonathan Arsenault.

The wife confessed to police after she was allegedly caught disposing of Jonathan’s remains – which included his headless body.

“I’m in big trouble,” Britany Barron is said to have told the agents who found her in the woods.

That’s when, MTO News learned, things went crazy. In her statement to police, Britany said that last Saturday her husband went through her phone and realized she was romantically involved with Jonathan, her co-worker.

Armando allegedly flew into a rage, beating and choking her until she passed out. Later that night, police say that he came up with a plan to MURDER the side dude, and he used his wife’s phone to do it.

Armando allegedly texted Jonathan and lure him to a park, the warrant says.

Once Jonathan arrived, Armando viciously beat the victim, the wife said, and then tried to force her to shoot him or crush his throat with her foot. When she refused, Armando allegedly shot Jonathan three times, killing him.

According to the warrant, Armando then ordered his wife to drive her lover’s body to a campsite – and dispose of his body. “He communicated to her that once the sun came up the next morning he would forgive her,” the warrant says.

But once there, the nightmare did not end. Britany Barron claims that Armando made her saw off Arsenault’s head, which was then buried in the dirt.

The next part of the plan was to dig a grave for the rest of the body. Armando planned to drive to Keene and send texts from Arsenault’s phones to throw off anyone looking for the young man, Britany said.