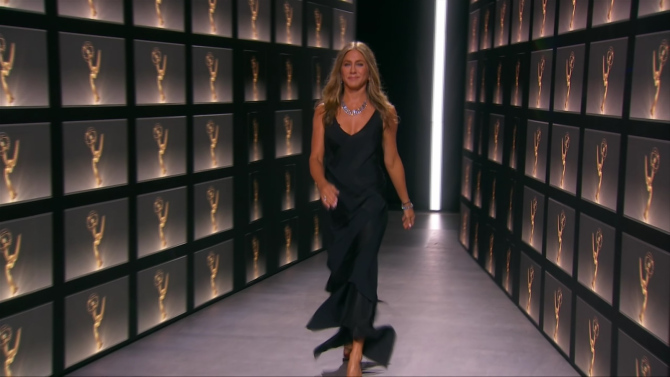 There was technically no IRL Emmy Awards red carpet this year, but believe me, there were tons of must-see Emmys 2020 fashion moments anyway. In an attempt to keep the Emmys and other award shows and major celeb gatherings safer this year, crowded carpets have been done away with—but great fashion lives on. Most of your favorite celebs still dressed to the nines to celebrate TV’s big night, and after wearing sweats like the rest of us for the past few months, it’s safe to say these Hollywood fashionistas were more than ready to show up and show out with their Emmys ensembles.

Pretty much every show I binge-watched during quarantine was nominated for an Emmy this year: Big Little Lies, The Handmaid’s Tale, The Crown, The Marvelous Mrs. Maisel and so, so many more. In the name of not outing just how much TV I’ve watched, I’ll spare you a complete list, but know that every show up for an award was more than deserving, and I spent hours watching just to confirm this. The things I do in the name of journalism!

I digress—while I was excited to see who would walk away with the awards, I was honestly more interested in seeing what the nominated celebs and presenters would be wearing. Would they all show face via video chat, dressed down at home in their jammies? Would they get dolled up for just a few minutes of screen time? I wasn’t sure if everyone participating would be on the same page, but I felt certain there would be at least a handful of great looks to applaud, and fortunately, I was right. Some stars did choose to stay comfy in their sweats, but plenty of others committed to fierce full looks.

From Zendaya to Reese Witherspoon, all your favorite celebs looked incredible at this year’s Emmy Awards, even if the format of the show was a little different. If Gaga’s myriad of face masks worn to the VMAs about a month back taught us anything, it’s that there’s no excuse for not serving a major fashion moment—no, not even a pandemic.

With that, read on to see the best-dressed celebs at the 2020 Emmy Awards.

No red carpet? No problem! Ross still made her mark in a ruffled gold Alexandre Vauthier gown with a high-low hemline, plus Jimmy Choo shoes and vintage Tiffany jewels.

Who doesn’t love a group shot?! Annie Murphy, Dan Levy and the whole crew showed up, and while most of the Rose family opted for monochrome black, Dan stood out in his gray kilt moment.

Zendaya’s stylist, Law Roach, took to Instagram to share a photo of the starlet looking incredible in Christopher John Rogers, complete with Louboutin heels and jewels by Bulgari. CJR was just awarded American Emerging Designer of the Year by the CFDA, and he nailed Zendaya’s purple and black look. Still, she changed later on in the evening to accept the award for Best Actress(!).

Reese kept it classy in a long black gown with some Louis Vuitton bling. She was celebrating not only Big Little Lies, but also The Morning Show and Little Fires Everywhere. This woman does it all!

Speaking of Louis Vuitton! Paul Mescal looked incredibly dapper in his LV look, even if he only wore it on his stairs.

Jen kept it cool and low-key (as always!) in a long black dress with a sultry V-neck and tons of bling.

Stylist duo Wayman + Micah shared Regina King’s look for the evening, which was a total knockout. “Emmys red carpet gone virtual!” they captioned a shot of King in an embellished blue Schiaparelli Couture dress and Stuart Weitzman heels. When she streamed into the show, King also wore a tee honoring Breonna Taylor, which was truly the best look of the night.

Porter usually goes big with a red carpet look, but for the virtual Emmys, he decided to opt for a red-hot number complete with punky silver accessories and Chapstick. Yes, Chapstick. Get your sponcon coin, Billy!

Cox served a look that can only be described as “Neo Black Trans Feminist Barbie Tings” and wow, she single-handedly saved the Emmys with this one-shoulder, fuchsia gown and top knot combo. Chef’s kiss. She later changed into a long black dress with mesh cutouts to present an award, and looked just as radiant.

Issa Rae streamed in in this chic mint suit, and like Laverne Cox, she too paired her look with a voluminous top knot. It’s all about the buns, baby!

Wearing a Prada gown and Cartier jewels (a power combo!!), Yara Shahidi looked absolutely stunning. The combination of feathers and the ultimate sparkly vibes was too perfect to ignore.

Better than any gown, Uzo Aduba wore a tee that honored Breonna Taylor. Thank you, Uzo, for using your spotlight to draw attention to a case that absolutely needs to be brought to justice.

OK, who allowed Cynthia Erivo to show up to the 2020 Emmy Awards looking this stunning?? Her dress was the sartorial equivalent of a far-away galaxy, and we’re so into it.

That’s right, OPRAH was there! The Queen of Everything looked amazing in a fully-sequined silver blazer with some round wire-frame glasses. Harry Potter meets Rainbow Fish, but make it fashun!