Sorry folks … even if you like Donald Trump, come on — now he thinks the coronavirus scare is something the media has cooked up to defeat him in November.

Trump flew off the handle on Twitter, saying, “The LameStream Media is the dominant force in trying to get me to keep our Country closed as long as possible in the hope that it will be detrimental to my election success.”

He goes on … “The real people want to get back to work ASAP.”

So, he says the media is the “dominant force.” Well, Mr. President, how about Dr. Anthony Fauci, who has cautioned about the desperate need to flatten the curve? How about the Governor of New York, who has held daily news conferences begging people to stay inside and warning this could last a long time? 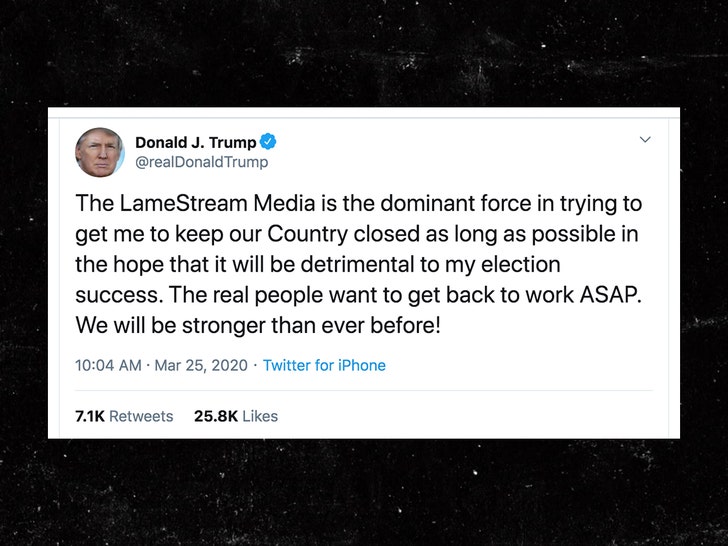 By the way … you actually think people other than “the real people” don’t want to get back to work? Absurd, and offensive.

How about a reality check. Trump is acting like this is all a media concoction, at the same time he’s using his daily briefings in place of his campaign rallies … trying to tell the world what a great job he’s doing. He’s essentially the M.C. of a news conference that doesn’t need an M.C.

BTW … 870 people have died so far in the U.S. alone, and DOCTORS think it’s going to get worse.