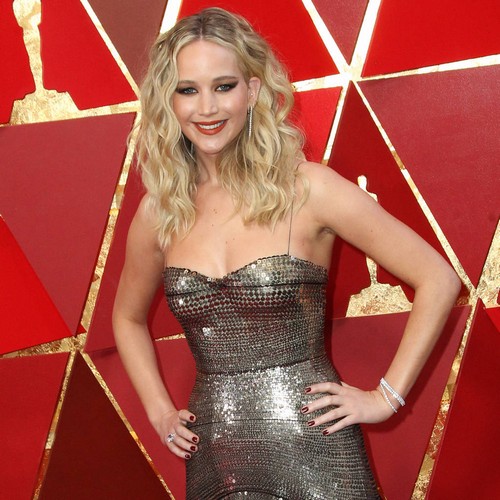 Jennifer Lawrence and Adele were spotted on a raucous night out at a New York gay club.

The Oscar-winning pair were seen at Pieces nightclub, a gay bar in the city’s Greenwich Village, on Friday (22Mar19), apparently celebrating Jennifer’s engagement to her art director beau Cooke Maroney.

In a video taken at the club and posted on social media, Jennifer and Adele are seen with a group of friends and are hauled on stage to take part in a drinking game by drag queens.

The Hello hitmaker, 30, is wearing an all-black outfit and thigh high boots with a drag queen dressed in an orange dress, and in the clip, she’s asked what she does for a living.

“I’m actually currently a stay-at-home-mum,” she laughed, as the crowd cheered, and then confirmed she was married when asked if she was single or taken.

“But are you still ready to mingle and have a great time with the gays tonight?” the drag queen asked Adele, to which she quickly replied: “F***ing obviously!”

The Hunger Games star, 28, was dressed down in sleeveless top and a black mini skirt, with her hair scraped up in to a messy bun.

And as one drag queen asked if the double Oscar-winning actress wanted to take part, Adele drunkenly shouted in her friend’s face: “Yes b**ch! She’s f**king engaged! She’s not even relevant to be here!”

“That has nothing to do with my drinking abilities!” Jennifer joked to the crowd.

Fellow clubgoers were quick to share the pair’s drunken night out – which some have speculated to be a low-key bachelorette party for Jennifer – and one reposted the video on Twitter, writing, “Adele is crashing Pieces drag show tonight. I just realised it. Oh boy, this is fun. Wait @Adele is not here alone. @JenLawrenceORG is here too. Hello full moon.”