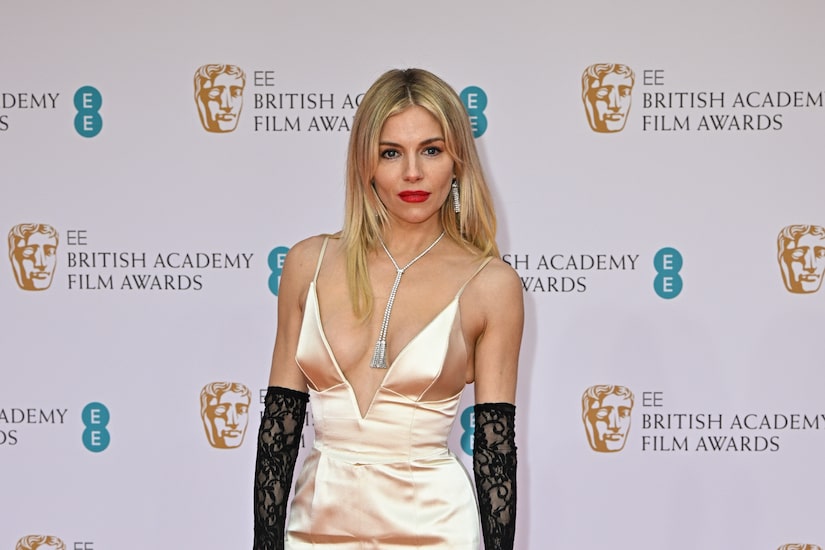 Sienna Miller is getting candid about her new series “Anatomy of a Scandal” and tabloid culture!

“Extra’s” Katie Krause spoke with Sienna Miller, who admitted that the word “tabloid” is not allowed in her home life with daughter Marlowe.

Miller shared, “The word ‘tabloid’ I don’t think has really come up, I think because to me, it’s a really dirty word. There are the filthy words we do allow to come up, but that’s not one of them.”

While Marlowe is not allowed on social media, the 9-year-old is a “typical kid growing up in New York City,” who loves Taylor Swift, Doja Cat, Dua Lipa, and Justin Bieber.

In “Anatomy of a Scandal,” Miller plays Sophie, the wife of a prominent British politician played by Rupert Friend, who is reportedly carrying on an affair with an aide.

It was a tough role for Miller to play since it “wasn’t pleasant” to be in the space of a woman being cheated on so publicly.

More than a decade ago, Miller was personally faced with a cheating scandal of her own while dating Jude Law. She commented, “You know, there were circumstances that were familiar when I read the script, and I did question whether I wanted to be in that environment.

“The feeling of knowing that a story is going to come out and there’s nothing you can do to stop it and how is that going to be when you’re intensely personal information is made public,” Sienna elaborated. “It wasn’t pleasant to sit back in that space, but at the same time I was playing a character experiencing something that may have been close to home, but her response is very different in a way. It was reclaiming a narrative or rewriting a memory or perhaps as catharsis in that, but we’re very different people.”

As for what attracted her to the project, Miller explained, “I’m very rarely English. I was suddenly excited by the idea of doing that and being back in London.”

Sienna also weighed in on why people are enthralled with scandal. She said, “I think that there’s just there’s something about… these stories, you know, when things happen and there are these twists and turns and shifts that you don’t see coming, and the characters are probably not who you think they’re going to be.”

Friend compared it to someone looking “underneath the hood of what seems like a very shiny car.”

He went on, “When you see what might look on the outside, like the perfect family with the beautiful kids and a beautiful wife and the house and everything, and then you sort of look underneath and see that all is not as it seems, it leads people to feel like, okay, there’s secrets and lies here and there’s injury, right?”

“Anatomy of a Scandal” streams April 15.