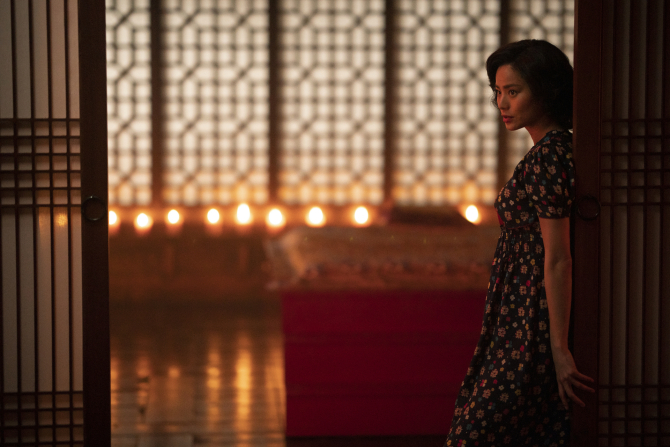 Jamie Chung can relate to a character in her episode of Lovecraft Country. In episode 6 of the HBO series, Chung stars as Ji-Ah, a nurse in the Korean War in the 1950s. The episode, which centers on Ji-Ah, reveals that the character isn’t just a nurse, but a kumiho, a nine-tailed fox creature, who seduces men in order to take their souls. “The episode beautifully aligns with the overall themes of this show, which is: How are people and monsters treated differently in society?” Chung tells StyleCaster. “Monsters being the kumiho. How are they frowned upon and how do they survive?”

But the kumiho isn’t the character Chung relates to most in the episode. In the episode, an unnamed Korean-American soldier talks to Ji-Ah about how he feels foreign in both the United States and Korea, a feeling that Chung can relate to.

“When I visit Korea, they’re like, ‘Oh. She’s American. Her Korean sucks. She barely speaks it. Her mentality is that of an American.’ I feel very much like an outsider there,” says Chung, who worked with a dialect coach to perfect her Korean for the role. “Even though I wasn’t born there, I still feel like that is my motherland. That is a home. Then in the states, even though I grew up in San Francisco, I’ve encountered moments of racism and derogatory names. It’s a true reality—not feeling fully like an American because where you come from is really important, which is my Korean heritage. I do consider myself Asian American.”

Ahead, Chung talked to StyleCaster about the lack of Asian American nominees at the Emmys, calls for a spinoff with Ji-Ah and whether Ji-Ah’s love triangle with Atticus and Leti will be resolved.

“When I first read the sides for this audition, I was blown away. There were just two scenes. Within those two scenes, one being in Korean and one being in English, there was so much detail and care about who this person was and where she came from. When I said that it’s rare that an Asian American woman gets to play a role like this. It’s that it’s rare that you get to deep dive into who that character really is. This is the first time that I’ve seen a show where they completely do a 180, and they’re like, ‘Alright. This one episode in the midst of a season is going to be completely dedicated to a character we heard over a phone. It’s going to take place in her home country of Korea during the Korean War.’ It’s never been done before. It’s from her perspective. Usually, with these supporting roles, it’s told through the perspective of the lead character and rarely from this POV.”

On the lack of Asian American nominees at the Emmys

“Coincidentally, the show was playing on the evening of the Emmys. I was like, ‘Oh no. No one is going to watch it. No one is going to want to read Korean subtitles for an hour after watching a three-hour Emmy program.’ Then I watched the Emmys, and I did not see—I mean, yes, Sandra Oh was nominated again—one percent of Asian Americans make up the people who are nominated for Emmys. Our stories are still not being told. For [Lovecraft Country creator] Misha [Green] to be able to share her platform and dedicate an entire episode to this Korean woman and her origin story was huge. That was a bold, brave move, and I’m so grateful. That’s what I meant by my post of saying, ‘These roles don’t come often.’ And they don’t. And they still don’t.”

“But we need more storytellers. We need people to take those kind of chances. I do think that creatives are making the moves to make that happen. You have Awkwafina with her comedy, Nora from Queens. It’s starting to happen, but it’s not enough. Studios are realizing there’s an appetite for that, but it’s not roles like this. The reason there are a limited number of Asian Americans who are up for these kind of nominations is because it’s so rare that they’re given those kind of roles.”

On now allowing her parents to watch the episode

On the decision to be nude on screen

“When I read the script, I realized that physicality is so important to this character. It’s who this character is. This character seduces men in order to take their souls. I knew that being squirmish about sex scenes or being embarrassed about it would hold me back from telling the story in its truest form. So even when it came down to contracts or the intimacy coach, I was game for anything because I trusted the director and Misha Green. That they weren’t trying to tell this story in a grotesque, oversexualized way. I knew that sex and sexuality was important to tell this story. I didn’t want to hold anything back or put any restrictions on that.”

“Oh, man. No. It was so exhausting. This role required so much real dedication. It almost ruined our marriage. I don’t know if we can handle that again. It was so overwhelming and draining. I was a stress case. I was so stressed out learning the Korean, doing the work, doing a good job. It was such a huge responsibility and such a huge role that I didn’t want to fuck it up. My husband stayed in L.A. We stayed in different cities, so I could concentrate on my work. He’s so patient with me, and I’m so grateful he gave me that space and he supported me and gave that time, so I could work on the material. I think I’m pleased with the origin story. I don’t know if I would be down for a spinoff. Or maybe? Sure why not? I guess I should just say yes. I guess it really depends on how this story is structured.” 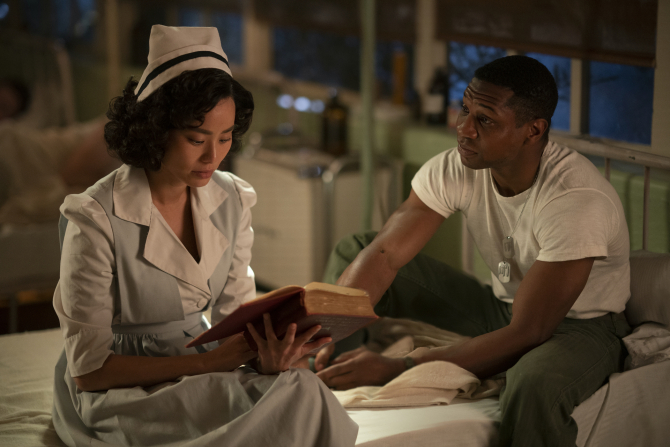 On Ji-Ah’s love triangle with Atticus and Leti

“They spent all this time setting up who this person is, who Ji-Ah is, where she comes from. You will see more of her. Piggybacking off the question of, ‘Oh no. What’s going to happen? Who’s he going to love? He’s going to go with?’ That issue is addressed as well.”