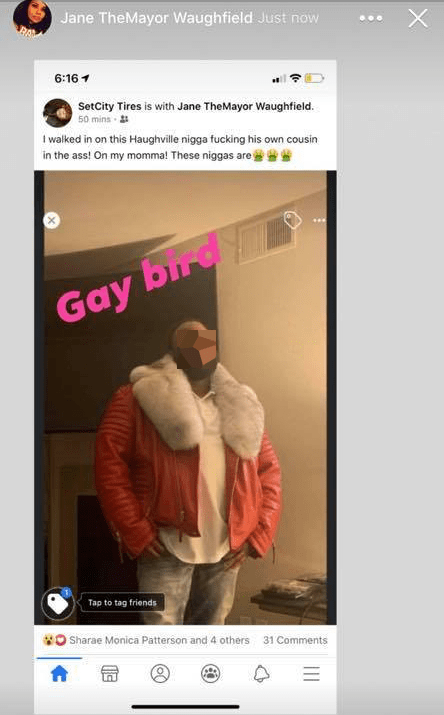 An Indianapolis woman was murdered, after going on Facebook Live and threatening to blackmail an alleged downlow gay man.

Police say that Jane Waughfield was shot and killed yesterday, while in traffic in Indianapolis. Police suspect two Black men are her killers.

But get this. Just a few moments before she was killed, Jane went on Facebook Live – and threatened to expose a secretly “downlow’ gay Black man.

In the video, seen below, Jane claims that she accidentally walked in one of her former lovers – as he was engaging in a downlow gay relationship.

Jane says she was “disgusted” and threatened to expose the man for being gay. She then asked for the alleged downlow man to pay her $5,000 to stay quiet.

Here is the video:

Here’s where it gets even crazier. Jane told her followers that the men she was attempted to blackmail, may try to kill her. In the video, Jane told fans, “They tried to kill me. They chased me out the house.” Later in the video she said, “If I die, let them people [the police] know they killed me.”

Hours after she made the video, Jane was shot and killed

Indianapolis Metropolitan Police Department said that Jane was hit with multiple shots while driving near Lafayette Road and 30th Street..

When officers arrived at the scene they found a crash involving four vehicles and Jane suffering from a gunshot wound.

She was rushed to the hospital where she later died.