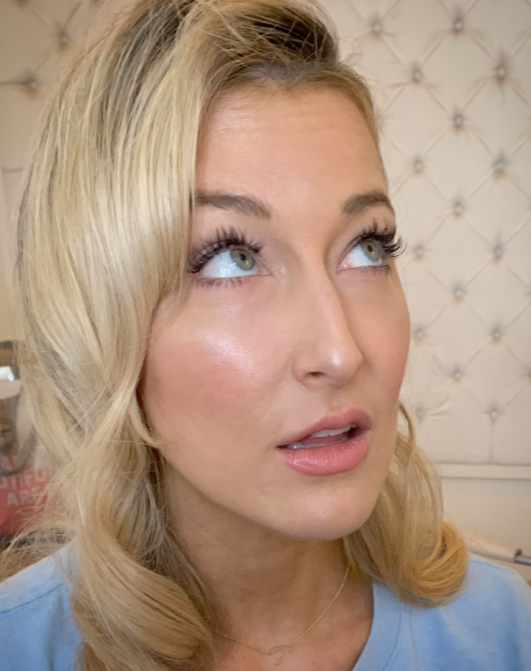 When my hair is freshly blown out and my lashes are fluttery, I feel downright unstoppable. When either of them (usually both) inevitably falls flat, I feel more like a wet cat. I’d venture to say this is the case for most women (and men, if they considered it). Hair–regardless of its location on the body–is precious real estate for personal expression. A professional blowout makes me feel good about myself, but you know what makes me feel even better? When two of the biggest bosses in beauty–who happen to be female–join forces to extend the benefits to my lashes. In an unexpected collaboration that also makes total sense, It Cosmetics’ CEO Jamie Kern Lima and Drybar’s CEO Alli Webb have united to introduce It Cosmetics Lash Blowout Mascara, powered by Drybar technology. The clever new product begs the question, “Why would you blowout your hair and not your lashes?”

The Lash Blowout Mascara ($25; itcosmetics.com), adorably packaged to resemble a Drybar round brush, actually harnesses the same technology as a blowout–lifting and volumizing your lashes. When I try it for the first time, I’m surprised by how much control the wand offers, just like a round brush during a blowout. I like to fan my lashes out in certain directions to make myself look more awake, and when I brush my inner lashes towards my nose, they freeze in place. When I brush my outer lashes towards my temple, they also remain. The effect is fully fanned out lashes in every direction, like each individual lash has been accounted for and pushed to reach its potential.

To celebrate the formula (which lasted through a sweaty Zumba class and is currently buy one get one free at QVC), I got to sit down with Jamie and Alli to learn all about their partnership. Read on for what they had to say about each other, founding uplifting beauty brands, and the product category they’ll tackle next (hint: it’s all about the eyes).

On meeting at QVC and joining forces

Jamie Kern Lima: For some reason, there’s this scarcity thing where some people feel the need to compete. When I meet a founder, I hope she’s not that way. I hope she’s of the abundance mindset: Let’s step into our power and uplift each other. We met backstage at QVC. You’re there 20 million hours, and trying to stay awake and be on. You get to know people’s true selves.

Alli Webb: Jamie was a regular fixture at QVC when I started, and I’m sure she probably gave me advice. She was extremely nice. I learned this on my podcast today, but Jamie was responsible for the before and afters on QVC. We do them with hair now, but she was the first to start that with makeup. Jamie knew the ropes. By the time I got to QVC, she was warm, welcoming and complimentary of Drybar. Lashes are hair, so it makes sense. I have such naturally curly hair and Jamie wants volume–as women, we want what we can’t have. Nine out of 10 women who come in want volume. There’s something that if your hair is bigger, it’s more flattering to your face. It’s the same with lashes. When your lashes are up and big and beautiful, it opens your eyes up. I literally won’t leave the house without putting on my eyeliner and mascara. Everything else is like maybe it happens, maybe it doesn’t—but not my eyes.

JKL: In our 11 year history at It Cosmetics, we’ve said no to every single inquiry to do a collaboration. Now we’re part of L’Oreal and they have amazing hair brands we could’ve chosen, but I wanted another female founder. I wanted it to be about something bigger.

AW: It’s so humbling and flattering. I knew L’Oreal had acquired It Cosmetics and that they had many hair brands, but Jamie really stuck her neck out to collaborate with me. Even though Drybar has never done makeup, there were so many reasons to do this.

On reinventing the mascara wheel⁠

JKL: Alli said 90 percent of her customers want volume, and it’s the same for us. The women and men that write in want more and more volume. Our Superhero Mascara ($24; itcosmetics.com) has that super cool elastic stretch technology that stretches the length and the width. For Lash Blowout, we wanted to blow out the volume, but also get that lift like you get from a blowout. When your eyes come alive and open up, your whole face comes alive. That’s why I was excited to partner with Alli, too. The whole idea of the round brush’s volume and lift.

Mascara is so personal, from the formula and to the brush. Our lashes have a three month life cycle from the time they grow until when they fall out, so they’re all different lengths. The bristles of this brush are cut at all different lengths to get all of your lashes, short, medium, and long. There’s little balls, micro-spheres, at the tip to help separate after you’ve gotten the volume.

On disruption as a female founder

AW: Drybar was a completely new concept when we launched in 2010. Blowout bars didn’t exist then. My brother and I had to personally guarantee our first lease because the landlords didn’t get it. There was so much pushback like, ‘What is this?’ Those were the first non-believers we encountered, then we launched and were very successful. The question became, is this a scalable business? By the time we started to go to institutional money, we sat down in a room with private equity guys, they were looking at me like, ‘Who is this girl and what the hell is she talking about?’

I was talking to a room full of men in suits, and they didn’t get it. For the ones that kind of did, they wondered why we weren’t selling women makeup and manicures. I said, ‘No no, we only do one thing and we do it well. Where there are women with hair, they will come and a get a blowout.’ Now, we do over 100 blowouts per day in 130 stores.

We didn’t mean to change an industry, but we did. It made women feel better, before a board meeting, an interview or a date, or as a Tuesday pick-me-up. It became part of the fabric of our lives, and it’s all about how we make women feel.

On what’s coming next

AW: There’s going to be a trend towards smoother hair. We have a lot of technology coming out that’s about smoothing hair–that’s something that’s hard to do without losing the volume. Enter The Brush Crush ($145; sephora.com), a mini straightening brush that heats up and smooths out the frizz without taking away the volume. We have something else on the horizon that’s really going to change the way women blow out their hair, but I can’t reveal much about that now.

JKL: I think It Cosmetics and Drybar should collaborate on a brow product. I have almost no brow hair, and if you create a brow product that actually volumizes whatever brow hair you do have, that would be the answer. We’ve said no to every potential collaboration that has arisen over the years because I really want it to make sense, and this really makes sense.