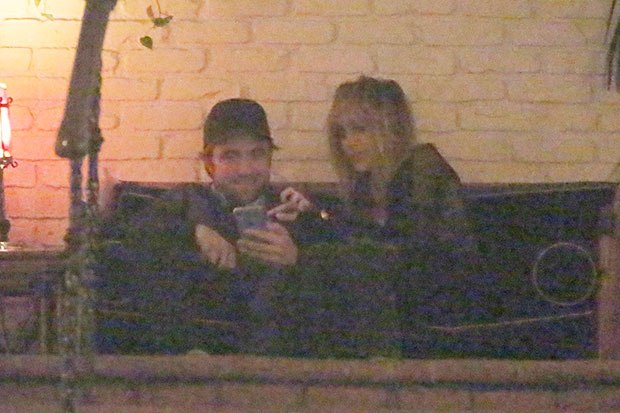 Robert Pattinson celebrated his 33rd birthday by sharing a sweet display of PDA with his lady as they cozied up at LA’s Chateau Marmont.

Love was in the air as Robert Pattinson rang in his 33rd birthday on May 13. It may not have been a milestone b-day, but the actor was sure to hit the town and took his lady, Suki Waterhouse, 27, with him. The adorable pair were spotted at Los Angeles hot spot Chateau Marmont and appeared to have a ball as they kicked it at the cozy establishment. Photos from the night showed the happy couple sharing a laugh, and cuddling up on a couch at the West Hollywood cocktail bar. Then, they were seen departing together later in the night with friend Tom Sturridge, 33, at their side.

The Twilight actor may have hit the town on his big day, but he’s kept a relatively low profile as of late. Robert and Suki were first photographed back in July of 2018, but have kept their romance on the DL. The last time we spotted the two in public was when they hit the pavement  for a run in London on Jan. 27. The actor and his model girlfriend both had smiles as they jogged together on the streets without a care in the world, bundled up for the chilly night.

However, as Rob moves on with a new lady, some past flames have bubbled up. After ex Kristen Stewart was spotted out wearing his t-shirt, fans had questions. But — it appears the two are just good pals at this point.  “Yes, Rob really does consider Kristen a friend even though they don’t see each other much at all, the last time being at a mutual friend’s home for a party a while ago,” a source close to Kristen EXCLUSIVELY tells HollywoodLife. “They text occasionally, sometimes about personal stuff and sometimes about work stuff. They are very much friendly but also very private too. Rob does not talk much about Kristen out of respect for what they once shared and where they are at now in their relationship.”

See a snapshot from Rob and Suki’s loving night out, above! We’re wishing a warm 33rd birthday to Rob! ( Forever known as Edward Cullen in our hearts.)