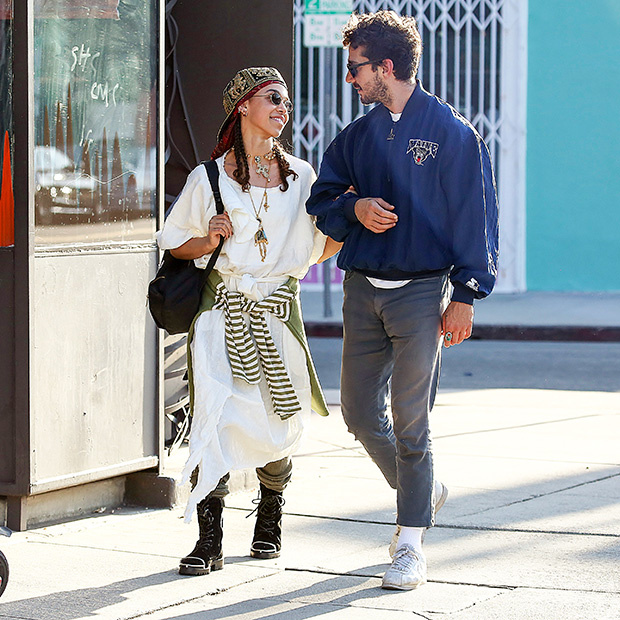 FKA Twigs and Shia LaBeouf proved their new romance is going strong when they were seen happily linking arms with each other during a shopping trip in Los Angeles on Apr. 29.

It looks like things are heating up for FKA Twigs, 31, and her new beau Shia LaBeouf, 32! The two lovebirds were not afraid to openly show affection for one another during a shopping trip in Los Angeles on Apr. 29, and it was quite adorable. The singer had her hand around Shia’s arm when they were seen walking in the palm tree-filled city and the smiles on their faces were hard to miss. At one point, they even looked at each other lovingly and looked happier than ever.

FKA Twigs and Shia’s latest outing comes after the talented songwriter’s ex Robert Pattinson, 32, opened up about his feelings toward her. The Twilight star confirmed that the two were on “good terms” in an interview with Sunday Times’ Style magazine, and he also admitted he feels the same way about his other ex and former co-star, Kristen Stewart, 29. “They were pretty long relationships, not like three months,” he said about the reasoning he’s not bitter about the breakups. FKA Twigs and Robert started dating in 2014 and even became engaged, but they split in 2017.

It’s great to know things are all good between the former lovers since FKA Twigs seems very content with her new man! The brunette beauty and Shia first met while filming the movie Honey Boy together and a romance was first suspected between them after he was seen leaving her London home on Sept. 25. Around the same time, a rep for Shia confirmed that Shia and his former wife, Mia Goth, who he married in 2016, had filed for divorce and that the decision was “amicable”.

FKA Twigs and Shia were also seen getting cozy in Paris in Oct., less than a month after they were first seen hanging out. We can’t wait to see where the couple goes from here!