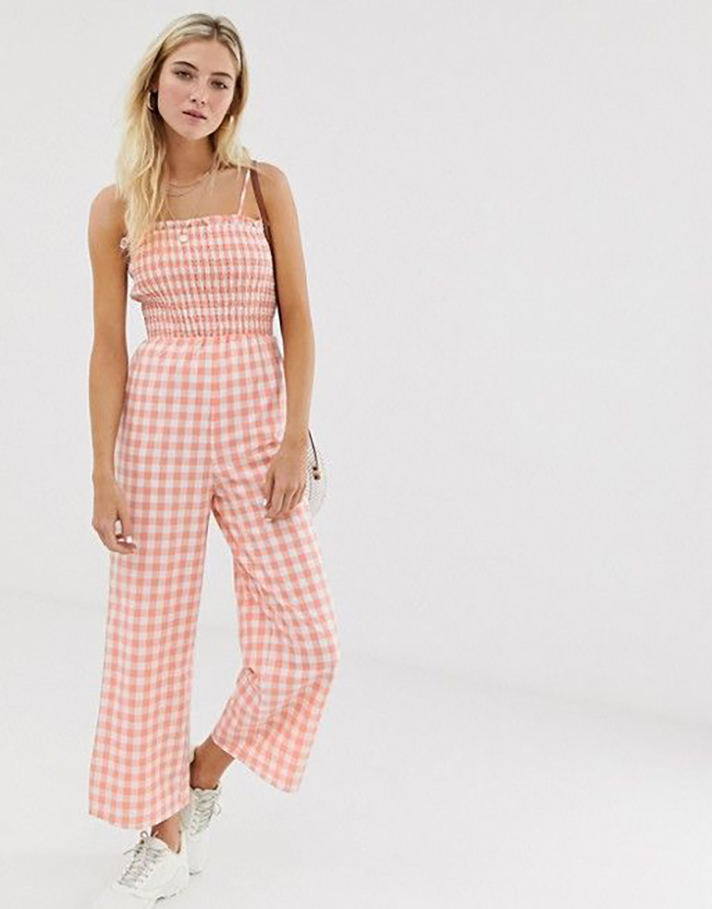 There are few trends I miss from my youth. I’m of the mind that fashion has only improved since the early aughts—an era that can really only be described as “regrettable” when you consider all the low-rise jeans, excessive embellishments and straight-up chainmail that pervaded it. But one relic from the past I’ve missed since my elementary school days? Smocked clothes.

There’s something endlessly fun about the super-elastic, super-textured feel of smocked pieces. The way your clothes fit your form without leaving you feeling constricted or immobile. The way you could pull the puckered fabric away from your body and watch it softly snap back—again, and again, and again. Smocked clothes were one of the few advents of the early aughts that deserved a full-on craze, and it’s a shame we let them go the way of rimless rectangle sunnies and purses covered in rhinestones.

Thankfully, 2019 has given us a rebirth of the smocked clothing trend (in addition to a handful of other retro resurgences I’m admittedly less here for—whatever, as long as low-rise jeans stay in the early 2000s where they belong, I can’t complain that much). And the best part about this specific revival is: Smocked clothes don’t feel distinctly aughts-y. There’s no separating tiny sunglasses, or strappy block heels, or lettuce hems, or bucket hats from their once-regrettable, once-very tacky origins. But smocked clothes almost feel more in line with the aesthetic of the 1990s than they do with that of the 2000s. They don’t reek of body glitter or Nelly Furtado music. We can wear them without reliving the days we spent doing the “Crank That” Soulja Boy dance while wearing chain belts and way too much mesh.

Smocked clothes are a sheer delight—nothing more, nothing less. And they deserve a spot in anyone’s sartorial rotation—even (and perhaps especially) in 2019.

Nothing about this gingham jumpsuit says 2000s, which means it gets a “yes” from me.

Proof smocked clothes are among the most figure-flattering around.

A going-out top that’s as fun as it is comfortable. (Plus, no risk of unintended wardrobe malfunctions here!)

Because tops aren’t the only pieces that deserve the smocked treatment.

Tie-dye and smocked all in one? Could this top be any more on-trend?

Because you shouldn’t have to pick between puff sleeves, bell sleeves, ruffles, florals and smocked bodices if you don’t want to.

The most quintessential spring top I’ve laid eyes on in a while.

A romper with such thoughtfully placed smocked detailing that it’ll never ride up or fall down.

10. Out from Under Jessica Smocked Floral Cami, $24.99 at Urban Outfitters

Because dresses aren’t the only way to get your floral on this season.

Simultaneously comfy and statement-making—what’s not to love?

All-smocked-everything is my new dream aesthetic.

Everything about this dress screams spring 2019.

Because everything—even your the comfiest of black tees—can be made better with a little smocked detailing.

16. Out from Under Smocked Tie-Shoulder Cami, $34 at Urban Outfitters

Sure to play well with anything in your closet.

There’s a lot going on with this dress, and all of it is absolutely wonderful.

The only thing that could make a smocked top better? Ruffles.

A smocked top that feels more aughts than ’90s—and if that’s your thing, embrace it.

A mini you’ll never flash someone in. (All that ruching will keep it firmly in place.)

Slip into this, and you’ll be happy—no matter what the weather is doing this time.

The smocked trend was basically designed for off-the-shoulder action.

A tube top you won’t have to pull back up every 10 seconds.

So comfy. So cute. So delightful.

Excuse me while I live in this top for the rest of spring.

Too fun to pass up.

This top is so damn fun to look at I can’t tear my eyes away.

A distinctly 2019 take on the classic spring bandeau.

Is it just me, or do bow sleeves make smocked pieces, like, infinitely better?

Oh yeah, smocked going-out tops are very much on the menu.

Because smocked tops and lettuce hems aren’t (and shouldn’t be) mutually exclusive.

Another piece you definitely owned some variation of in middle school, that you’d definitely look cooler in now.

A smocked top fit for the office.