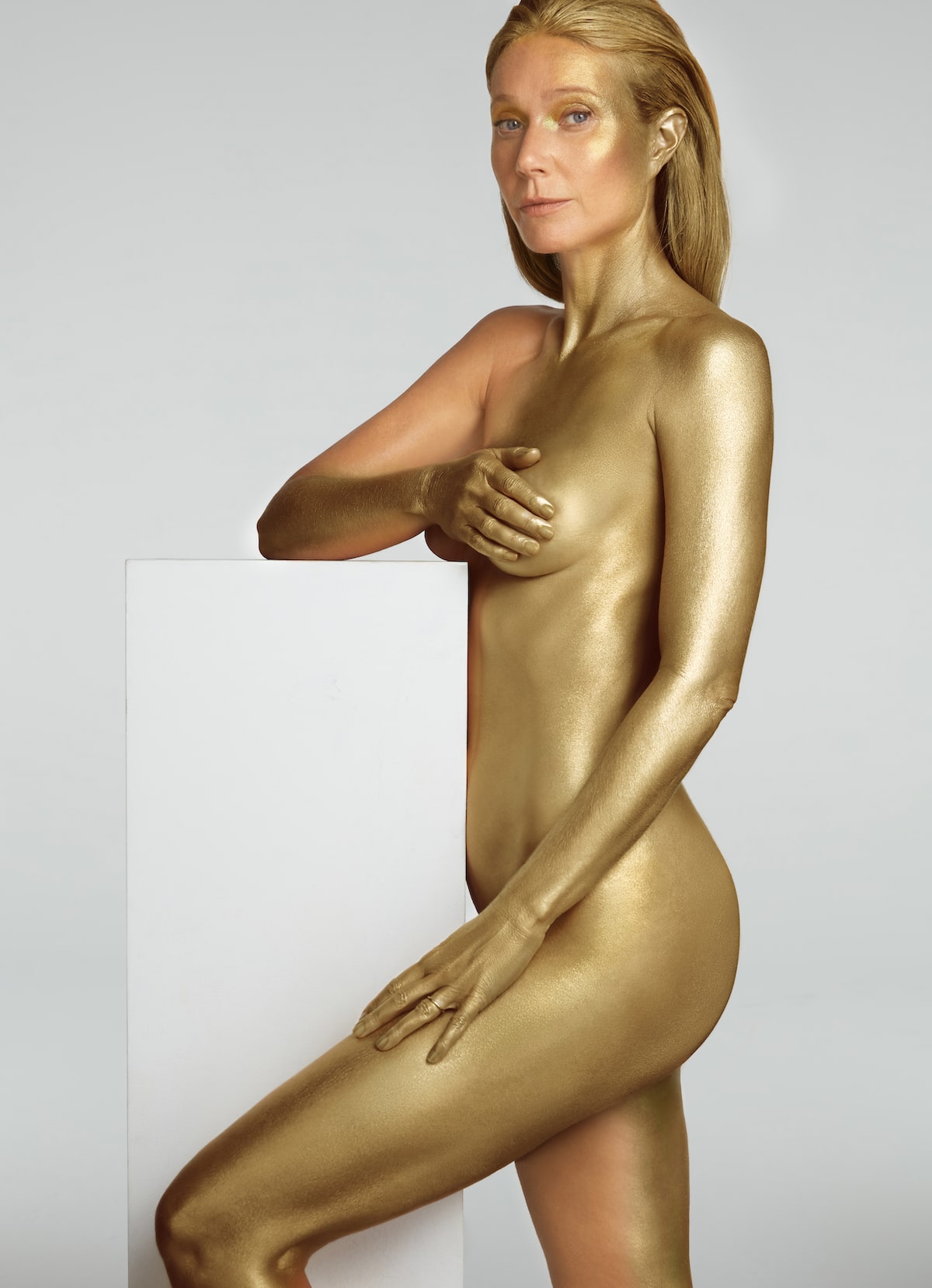 Paltrow made her birthday one to remember by stripping down to nothing and being painted gold. She said, “Celebrating the golden jubilee, which, of course, is 50 years, then they told me I had to be relatively naked in gold, which was really terrifying… I thought, ‘Okay, one last time.’”

As for what her TV producer husband Brad Falchuck thinks of the pics, Gwyneth smiled, saying, “I think he liked the pictures very much.”

Paltrow got candid about her age, saying, “I’ve never felt better. I’ve never felt closer to myself. I still have tons of challenges in life and work, but I feel like I’m coming in from a foundation of really knowing who I am and being able to redefine what beautiful is for me. And it’s not necessarily that you have to be 30 years old. In fact, I would never go back there for anything.”

When Jenn complimented Gwyneth and Brad’s relationship, she explained how they keep the passion going. Gwyneth said, “I think really good, honest communication. I think people say that a lot, but I think what that really means is being willing to have difficult conversations in a really safe space and being able to say what you feel and what’s on your mind knowing the other person is mature enough to hold that and work through something with you — that’s what we work on a lot.”

Do they ever argue? Paltrow answered, “I’m sure I annoy him sometimes… We’re not really arguers. I think we’ve learned a lot from our previous lives and relationships and, again, if something is on our mind… we try and deal with it and not get triggered.”

Paltrow recently opened up about experiencing an age crisis when she turned 40. She told Jenn, “It’s something that’s imposed on us as women that we turn 40 and we somehow are gonna lose our beauty and we’re not gonna be as relevant and as sexually desirable… so I definitely had a flip-out when I turned 40, ‘cause I was a victim of all that thinking. But then I turned 40 and I was like… ‘Wait, this is amazing, and I feel much more myself!’ I had a great decade. Now that I’m 50, I’m like… ‘This is even better.’”

Paltrow also revealed whether she plans to return to acting. She said, “I’ve learned at this point in my life to never say never, and so I feel like right now with my job at Goop, it would be impossible… I think passions can ebb and flow, and I wouldn’t be surprised if at some point I felt, like, that fire again for it. Right now, my day job is all-encompassing.”

Gwyneth has been working with other stars like Kourtney Kardashian. She commented, “We did a collaboration together, which is great… When she started her Poosh, people were being sort of nasty about it, so I thought, ‘Wouldn’t it be great to do something together and show people women can be in concert and be loving and supportive of one another?’ I was really happy with that.”

When asked about people pitting women against one another, Gwyneth noted, “I think it’s a very deeply embedded mechanism of the patriarchy, a way to keep women out of their power… Women, together, really can change the world and are so much stronger together.”

Gwyneth also shared her take on the Me Too movement, saying, “I am very happy there is a template for women to come forward… People are taking these allegations a lot more serious than they did a decade ago… I think there is a still a long way to go and women without platforms still have a very difficult time coming forward.”

Paltrow has been busy running her $250-million Goop empire, and is now teaming up with Copper Fit for an activewear collection called Gwyneth x Copper Fit. She dished, “I think the idea of really kind of incorporating wellness into fitness wear… it just really speaks to me. I really love the product and so it’s kind of easy to be the face of it and talk about it…I use this stuff a lot and I think I am a person who is open about wellness.” 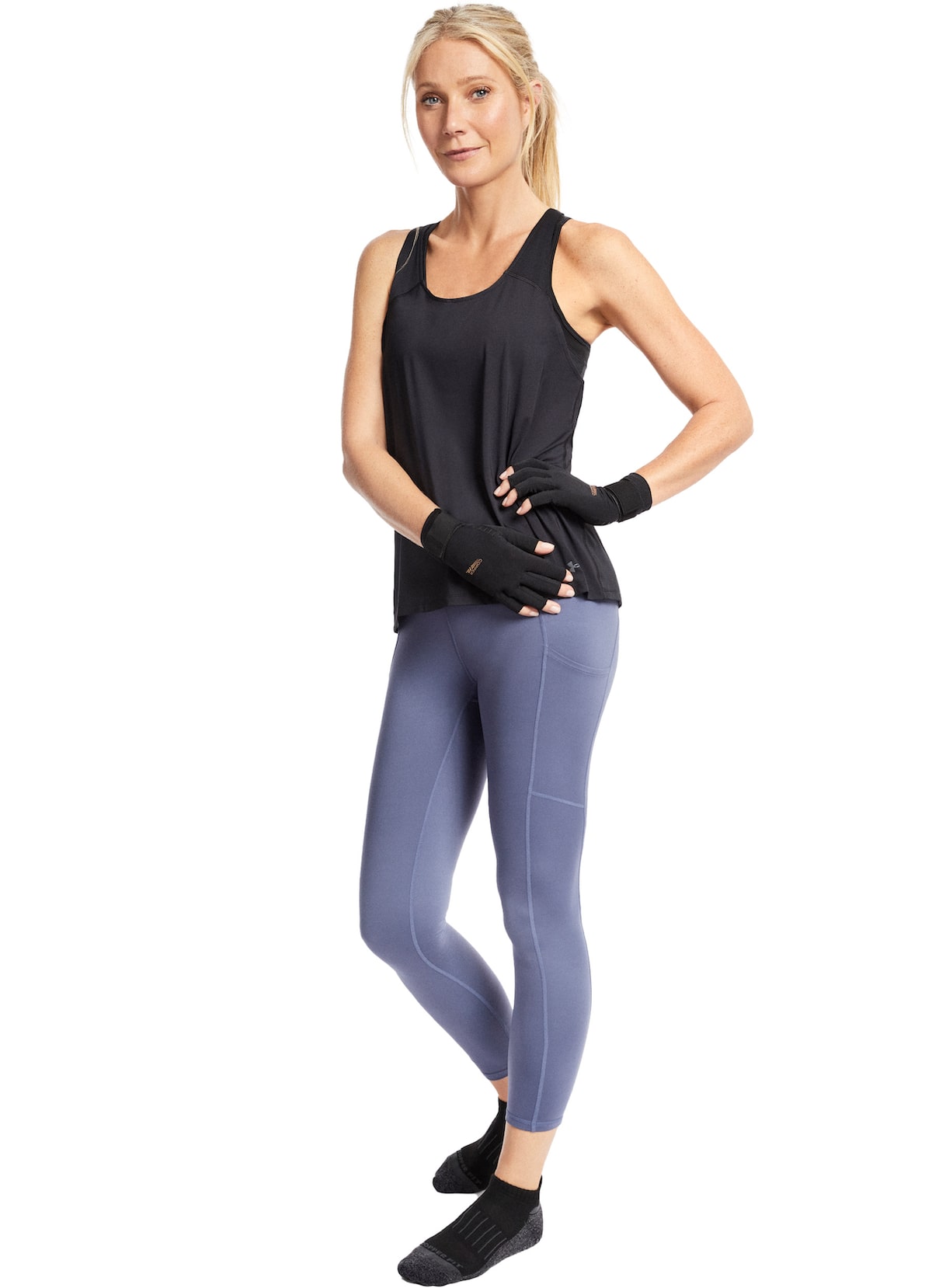 Paltrow has inspired others to start their own lines, including her ex, Brad Pitt, who has had very complimentary things to say about her business. She said, “That’s so nice… I really believe that… every person should try to follow their dream and passion… And we oftentimes are really limited culturally, how people are comfortable seeing us… I love the idea of [people] being able to reinvent themselves… If I’ve played a small part in cutting a path for people to change careers and do something unexpected, then I’m very proud of that.”