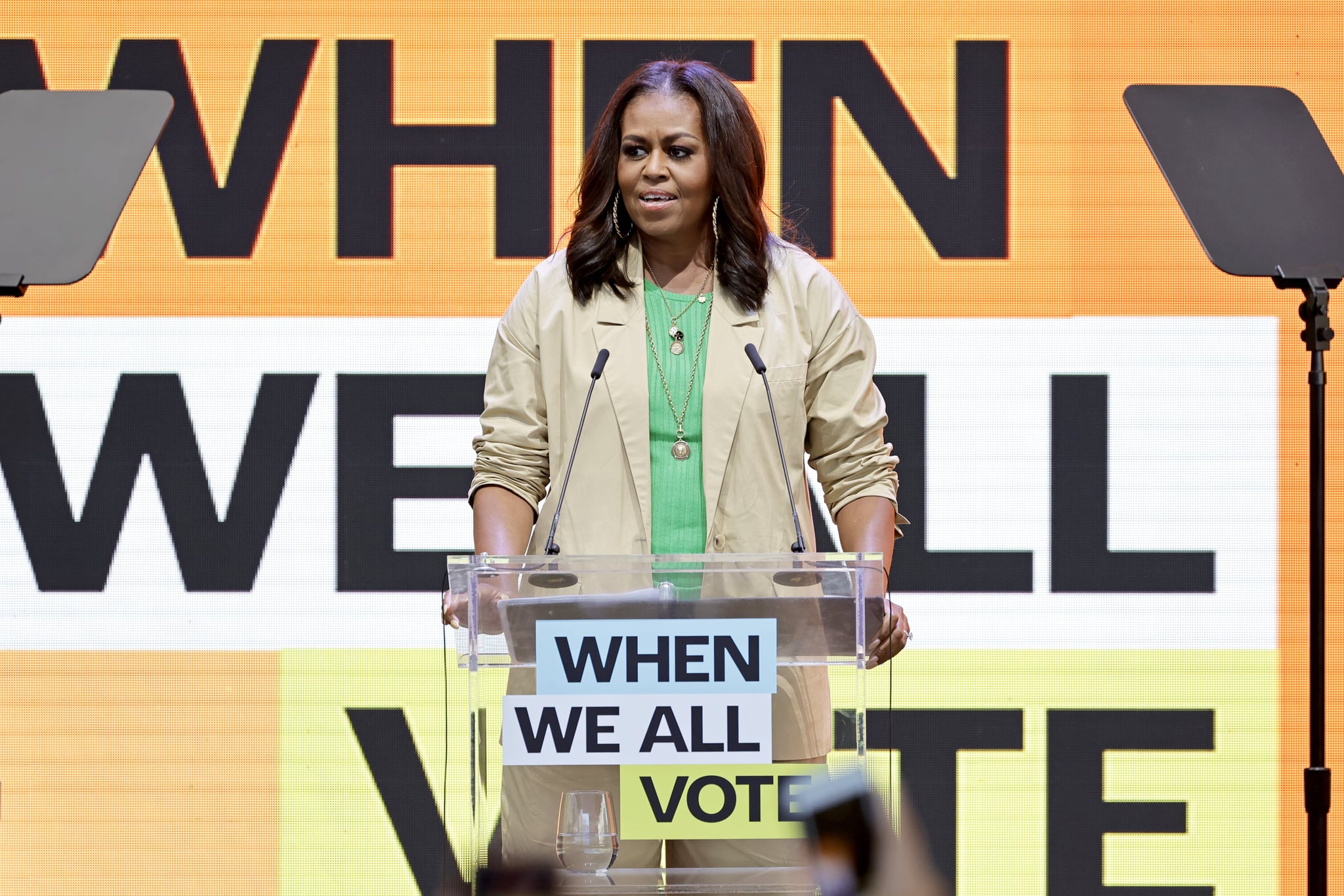 Michelle Obama delivered the keynote address at When We All Vote’s Culture of Democracy Summit on June 13, delivering a powerful speech that emphasized the need for federal and individual action to protect and expand voting rights in America.

She opened her speech by acknowledging the grief that has defined the past few weeks, referencing recent shootings in Uvalde, Buffalo, Tulsa, Philadelphia, her hometown of Chicago, and “far too many other communities that are coping with similar tragedies,” she said. But the conversations sparked by these shootings, she said, are reminders that it’s “important for us all to remember that it’s not just about who you vote for. It’s not about whether you’re a Republican or Democrat or independent — this is so much bigger than that. Because right now, when we look around at everything that’s happening when it comes to voting and our democracy, it is clear that we’re seeing a deep discrepancy between what we tell ourselves about this country and what we can see with our own eyes,” she continued.

She went on to reference recent voting rights restrictions currently being enacted across America. “Last year alone, 19 states passed bills to restrict voting. That’s 87 million people who might find it harder to vote than they would have just a couple years ago,” she said.

“This is not a partisan issue. It’s an American one. And anyone who says otherwise is trying to get you to stay quiet about the threats we face.”

She continued to emphasize the fact that the decisions made at the polls affect all of us. “Here’s the most insidious thing we tell ourselves — that it won’t happen to me,” she said. “We tell ourselves that even though there was an insurrection, the presidential election was still, in fact, certified . . . We tell ourselves that our grocery stores won’t get shot up by a white supremacist. That our babies will be safe in school . . . That maybe strongmen are taking over across the world, but it won’t happen here. [Sure], the sea levels are rising, but I don’t even live on the beach,” she said. “We are clowning ourselves, because these last couple of months alone have proven that there’s no guarantee that these issues won’t reach every single one of us.”

Acknowledging the exhaustion and helplessness that can come with facing these issues and with dealing with the chaos of American democracy on the whole, she emphasized the need for collective action and strategic, sweeping change. “We need a remix. We need a strategy,” she said, referencing new voter ID laws, cuts to early voting hours, redrawn house districts, and other impediments to voting recently enacted around America. All of these restrictions, she said, were made possible by a single Supreme Court case “that was decided by a single justice.” She was referring to the 2013 court decision that struck down a key tenet of the 1954 Voting Rights Act which had defended voters from discrimination for decades, opening the door for nationwide voter suppression.

All of this, she said, should mobilize each and every citizen to pay attention and take action. “No one has the luxury to sit out or stay at home just because you’re not feeling excited enough,” she said. “If you don’t vote, other people will.” She then urged voters not to succumb to anger or hopelessness, but instead to make participating in and organizing for democracy a part of daily life, utilizing whatever community, audience, and medium they have access to. “This is not a partisan issue. It’s an American one,” she said. “And anyone who says otherwise is trying to get you to stay quiet about the threats we face.”

She then urged Congress to take specific action to protect voting rights, such as legislation that would allow voters to register on Election Day; that would automatically register 18 year olds to vote; that would legalize statehood for Washington DC and Puerto Rico; and that would get rid of the filibuster — the Senate loophole that, when enacted, mandates a 60 percentage majority in order to pass legislation.

Finally, she called on each and every person to consider how they might be able to fight for democracy, urging young people in particular to take action. “We see how you can snap a cell phone video and change the world,” she said. “You better believe you already have the tools to change the way people think about our democracy.”

When We All Vote is an organization dedicated to encouraging voting across race, class, and age groups. The organization works to register voters, to build an educated electorate, and to encourage voters to take grassroots action in their communities, among other efforts. It’s helmed by a star-studded board of cochairs, including Selena Gomez, who introduced Obama’s speech. The board also includes Liza Koshy, Shonda Rhimes, Megan Rapinoe, Tracee Ellis Ross, Kerry Washington, and Rita Wilson, who joined cochairs Tom Hanks, Faith Hill, Janelle Monáe, Lin-Manuel Miranda, and Chris Paul in 2022.

The summit, which took place from June 10-13, featured a welcome from Lakers icon Magic Johnson as well as conversations with Gomez, Monáe, Ross, Wanda Sykes, and a multitude of others. Discussions addressed everything from the history of voting rights in the United States to the current status of Roe v. Wade.

Obama founded When We All Vote in 2018. Since then, When We All Vote has gone on to help hundreds of thousands of people start or complete the voting process. It has also launched initiatives such as Vote Loud, which encourages young people to vote; My School Votes, which helps create voter registration clubs in high schools across the country; and Civic Cities, which provides leaders in cities across the nation with resources to encourage and mobilize their communities to vote. The organization also encourages and helps voters to hold their elected officials accountable, among other important efforts.

If you’re feeling inspired, make sure you are registered to vote and sign up to support When We All Vote in 2022 and beyond.