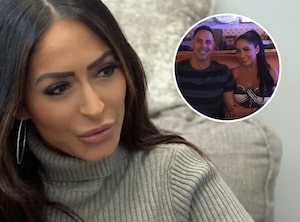 “I think we all want to see you happy and none of us have in a really long time.”

Angelina Pivarnick was shaken after a pet psychic allegedly “confirmed” some of her worst suspicions about husband Chris Larangeria — and while she’s still hesitant to pull the plug on their marriage, her “Jersey Shore Family Vacation” costars are clearly on Team Divorce.

Following the psychic reading from last week’s episode, the women all scattered when Chris returned home all sorts of “pissed” off. We didn’t see him the rest of the episode, but at Mike “The Situation” Sorrentino’s “Blessification” ceremony, Pivarnick vented a bit more about how the medium “solidified” some pressing questions about her marriage — namely, that Chris may have cheated on her.

“Staying in a marriage you’re not happy with? Time is money. You’re wasting your own youth,” Sitch told her, before the rest of the cast let her know divorce may be the best route to take.

“I think we all want to see you happy and none of us have in a really long time,” added Jenni “JWoww” Farley. “We don’t want to ask you every day how your relationship is, but it’s brought to the table every day with new issues. You deserve to be happy.”

Deena Nicole Cortese told Pivarnick to “do what’s best for you,” urging her to “get the confidence to do it.” She added, “Unless you have the confidence, it’s not going to happen and you’re going to sit in a loveless marriage and that’s actually extremely sad for both of you.”

Uncle Nino was also at the event and shouted, “Get a new man!” before Pauly D joked that, should they split and she needed a place to live, she could always move in with Vinny Guadagnino. “He’s doing all these ‘Double Shots of Love,’ his love’s right there,'” he cracked.

Vinny and Pauly also both poked fun at Angelina for taking the word of a psychic so seriously — though it’s clear there were issues before the medium got involved.

Speaking separately with Nicole “Snooki” Polizzi after the ceremony, Angelina asked what she would do in that same situation. “Not even think of it, just file and go,” she said, as Pivarnick asked whether it was weird she still wanted to give the marriage one final try. Snooki said it wasn’t — but she had to be sure it would actually be the last attempt.

“I already know all the answers, I just don’t know how to pull the eject button,” said Angelina, “I always look at the good in somebody, even if they treat me so f—ing bad. I lost myself.” In a confessional she said she didn’t want to go through the process of divorce, adding that “marriage is not an easy thing, at all.” 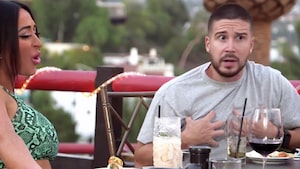 Vinny Calls Out ‘Scummy’ Angelina for Making Up Lie About Him, Gets Threatened by Chris

The next day, Angelina showed up solo to an engagement party for Jenni — admitting she was “mentally, emotionally drained” but wanted to support her friend and costar. They all noticed she was acting a little “off,” while Mike pointed out in a confessional that they were all celebrating Jenni finding her “happily ever after” following a divorce — and hoped Angelina could get there too.

After the celebration, Deena pulled Angelina aside, where Pivarnick expressed her hesitation about divorce.

“I feel like, ‘Do I even believe this woman?’ I don’t know. Am I really going to take this whole entire marriage and put it on some psychic’s hands and figure out what the f— I’m gonna do with my life?” she asked. “There’s all different people pointing different directions, but I have to listen to myself and do what I wanna do.”

The hour ended with Deena telling Angelina she needed to sit down and talk things out with Chris, something she said she would do — with nobody else around. Hopefully, that doesn’t mean camera operators as well.

The episode comes days after it was revealed Chris actually did file for divorce back in December, so don’t hold your breath to see if they can work things out. 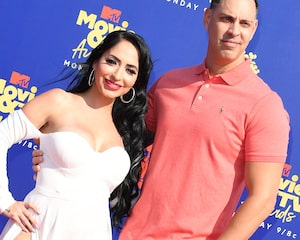