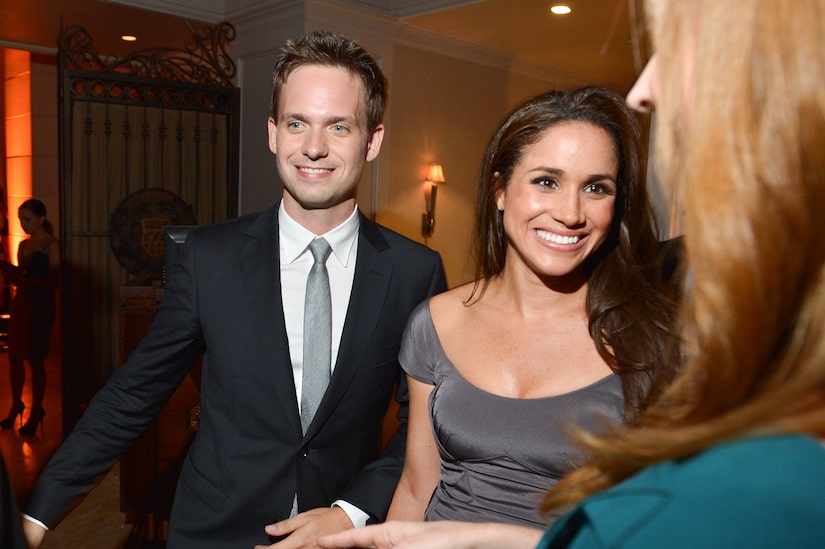 “Extra’s” Katie Krause spoke with Patrick J. Adams and Troian Bellisario about giving back, as well as the possibility of working with his former “Suits” co-star Meghan Markle in the future.

Markle currently has a deal with Netflix and Spotify, so would Patrick be down to work together again? He said, “I would kill to work with Meghan again.”

Raving about Meghan, Patrick called her a “huge talent” and the “most motivated, driven human” he’s ever met.

As for Markle’s upcoming projects with Prince Harry, Patrick added, “I’m just grateful for her influence in my life… Her wanting to give back and her charitable causes… inspires us to want to, like, really dig into opportunities like this.”

Patrick and Troian are giving back by working on a new apparel collection The Troian and Patrick Collection inspired by their shows “Suits” and “Pretty Little Liars.” Troian noted, “100 percent of the proceeds are going to create a photography academy over at Variety Boys and Girls Club in Boyle Heights, Los Angeles.”

The pair were able to tour the facilities, which they hope will train a new crop of photographers.

Patrick added, “As soon as we learned about Variety and had the chance to go down there… we couldn’t believe that we had the opportunity to raise money for this photography program.”

In terms of what this will teach their daughters Aurora and Elliot, Troian commented, “I want to instill in them that they have the opportunities to give back to their communities.”

Patrick also expressed the importance of “thinking of others” as part of a daily routine. He elaborated, “Instilling, like, what can you do for someone else on a daily basis and seeing how much that enriches your own life.”

Patrick and Troian’s kids are keeping them super busy. He gushed, “They’re, like, literally the greatest and we learned something from them every day.”

Adams made sure to show some love for Troian, saying, “I couldn’t have a better partner in crime. We love doing it together.”

Last year, Troian gave birth to Elliott in a car, a story that they’ll definitely tell her when she’s older! She quipped, “One of the things that we constantly consider is, ‘Do we keep the car to give it to her on her 16th birthday because it was her birthplace?’”

Troian’s show “Pretty Little Liars” is getting a reboot, but will she be involved? She answered, “I haven’t been involved in any way. Neither has anyone I know from the old show, so I think it’s going to be completely new for us, but I can’t wait to see what they’ve done.”

When asked if she was done playing Spencer, she said, “I’ve always adored Spencer… I’m open to anything.”

Bellisario said she’s also open to directing an episode if the show is picked up for a second season.

For more on Patrick and Troian’s clothing line, visit ShinetheLightOn.com.