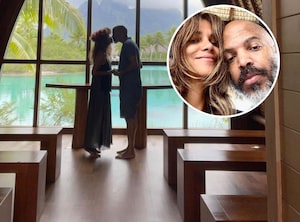 Hunt says that when Dwayne Johnson congratulated them the couple realized people were actually talking their New Year’s “teasing” seriously.

It was the prank heard ’round the world, and yet Van Hunt insists it was never intended to be a prank at all. Nevertheless, after congratulations began pouring in from celebrities and fans alike, he and Halle Berry realized the world was taking it seriously.

The couple sent the world into a furor with a New Year’s post Berry captioned, “It’s official…” The words accompanied an image of the couple together under an archway, and immediately got everyone believing that they’d decided to ring in the new year by getting engaged.

“I wanted to clear that up, we never tried to do any prank,” Hunt insisted during an appearance on The Domenick Nati Show on Thursday. “We were just teasing, trying our very own January Fool’s Day.”

The couple definitely fooled a lot of people, with Hunt saying that it was right around the time that Dwayne Johnson wrote a sincere congratulations for their engagement that they realized their “teasing” had gotten a little out of hand.

That isn’t to say that the idea is completely off the table, with Hunt jokingly revealing the one teensy tiny minor little thing he’d need to see happen before the two could tie the knot for real.

“Maybe after “Automatic Woman” is nominated for an Oscar and wins,” he joked, after trying again and again to steer the conversation away from his relationship with Berry and onto why he was there — to talk about this song. 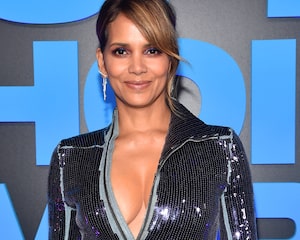 “With your help and your cigar, Domenick, it could happen, man,” he added, teasing the host who’d mistakenly started calling the track “American Woman” before revealing he didn’t even know if it was an album or a single.

“It’s a short-list Oscar-nominated song, that could be H.E.R.’s second win in a row,” Hunt continued. The track is featured in Berry’s hit Netflix film “Bruised,” and features both Hunt and Berry as producers. In other words, it could be big for all three of them!

Maybe even big enough to celebrate with a wedding! Certainly, relationship talk seemed to be what Nati had prepared to talk about, no matter how hard Hunt tried to deflect away from it and back to H.E.R. 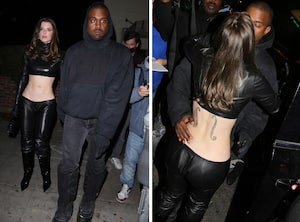 In all honesty, Hunt was very sweet when asked about his relationship with Berry. He very pointedly said he would not go into how they met or how things started between them. Instead, he spoke about how grateful he was that they found one another.

“The opportunity to me is something that I never even dreamed was possible, to begin a relationship at 50,” he said. “But it’s going really, really well. That’s all I can say.”

Hilariously, after Hunt again tried to emphasize what a big deal it would be for this album, which is short-listed for an Oscar, to win, Nati’s next question was to ask how long after they’d started seeing one another did they move in together. 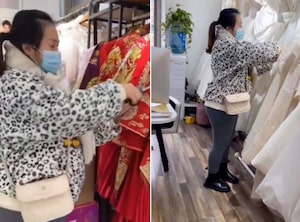 Finally, Hunt really pushed back against the non-stop talk about his relationship, asking him if any of the people he was reading questions from were asking about his music or this track or anything. After pressing and trying to keep the questions Berry-centric, Nati finally relented and agreed to talk about the music.

“Does Halle sing at all? Is there a possibility of her being involved in your music?”

Berry acknowledged the viral not-an-engagement in a follow-up post, laughing that so many people hadn’t swiped to the second picture to see that it was just a New Year’s post. “We were just having some New Year’s Day fun!” she wrote. “Thank you for the well wishes, tho’, it really touched our hearts! Now it’s OFFICIAL, the internet is no longer undefeated.”

As for Hunt, his response was even funnier: