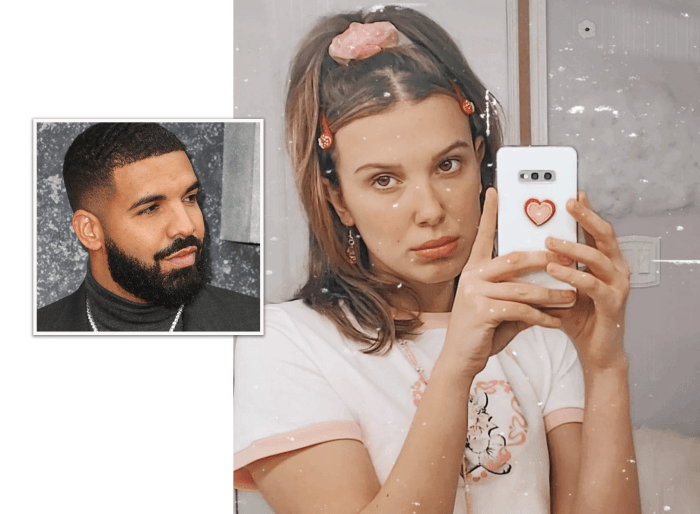 Drake’s new album Certified Lover Boy is the number one album in the world today. But MTO News learned that the album contains some “secret Lyrics” that appear to discuss his relationship with 17 year old actress Millie Bobbie Brown.

And many feel that the lyrics suggest that Drake has been “grooming” the underage actress for years – and are uncomfortable with it. Grooming is when someone builds a relationship, trust and emotional connection with a child or young person so they can manipulate, exploit or abuse them.

Here are some lyrics that suggest that Drake was dropping hints about his intentions with the child actress.

In the song IN 2 DEEP Drake raps:

Step to my girl, hands getting thrown up,

February 19th is the day of the Glow Up

Later in the same song, Drake raps, “Baby that p*s*y was so worth the wait.”

But that’s not the only lyrics that fans are upset over. Drake also had a questionable line on his track In the Bible, Drake raps:

It could just be a coincidence, but MTO News confirmed that Millie Bobbie Brown is 17 years old.

Finally, Drake brought on R Kelly to help write for this album. R Kelly is currently in prison facing charges that he groomed and then abused many young people – both makes and female.

Actress Millie Bobby Brown has been in the spotlight since a very young age. She came to public attention and quickly gained popularity when she played the character of Eleven in the science fiction horror drama television series Stranger Things.

Millie Bobby Brown and Drake met back in 2017 – when she was just 13 years old – at the Emmy Awards. The duo quickly formed a friendship, MTO News confirmed,  as Drake was a fan of her show Stranger Things.

Brown, later in 2018, during the Emmy Awards interview she said that she loved Drake and they had met in Australia and they were BFF’s. She also said that they texted frequently and Drake also helped her with boy problems.