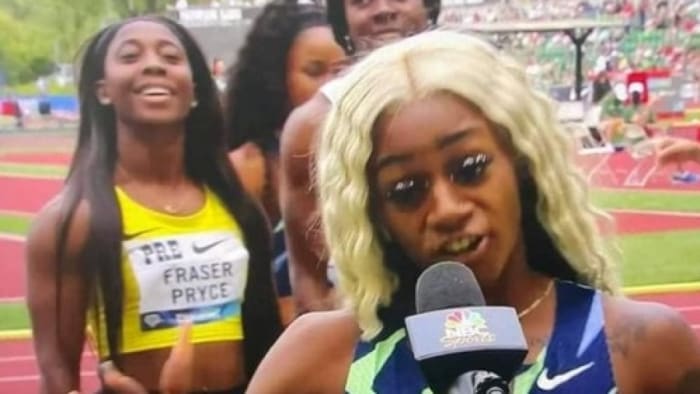 Disgraced track and field star Sha’Carri Richardson continues to self destruct before our very eyes.

Yesterday MTO News confirmed that Sha’Carri, 21, made comments that many believe were veiled threats of violence against the three Jamaican female track stars who beat her in a recent track meet – Elaine Thompson-Hera, 29, Shelly-Ann Fraser-Pryce, 34, and Sherika Jackson, 27.

Polo G’s Mother Got Into A Shootout At Her Atlanta Home – On IG LIVE! (Video)

It all started when trolls began spamming Sha’Carri with messages, claiming that the three Jamaican runners who beat her racing, could beat her in fight also. The messages were cruel, and triggering – and Sha’Carri responded badly.

Minutes after that back-and-forth, Sha’Carri shared a picture which had the word “Violence” with the toggle on. Many believe, MTO News has learned, that Sha’Carri was pointing out that she could beat each of the three Jamaican runners in a fist fight.

We think though, she may not want that smoke.

Sha’Carri faced a harsh 30-day suspension for marijuana use that led to her not being able to compete at the 2020 Tokyo Olympics. But Richardson returned to the track two weeks ago to face off against Elaine Thompson-Hera, 29, Shelly-Ann Fraser-Pryce, 34, and Sherika Jackson, 27, the respective gold, silver, and bronze 100-meter medalists and lost.

As you can imagine, Sha’Carri’s mentions are in shambles right now – with fans who are either disappointed in her, or upset with her actions.