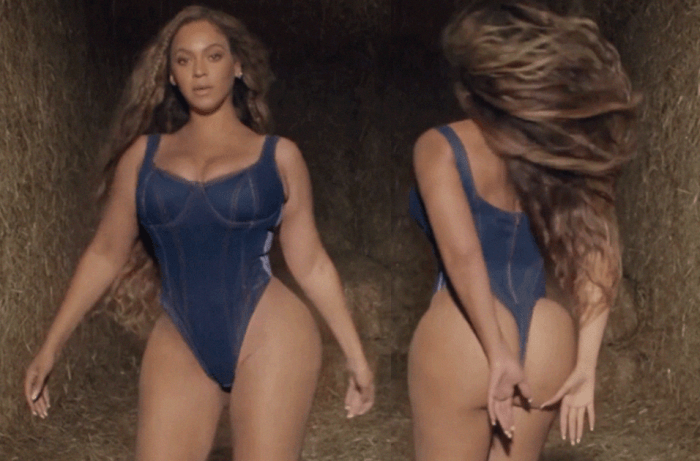 Beyonce’s currently trending across social media – for the dramatic changes to her body. Beyonce released a series of new pictures and video for her new Ivy Park Rodeo collection – and MTO News learned that fans are saying that her body (and in particular her butt) looks much different.

Beyonce who had always been lauded for her naturally curvy and sexy body doesn’t quite look like herself …and is looking more like Nicki Minaj these days.

Some of Beyonce’s most die-hard fans are claiming that her new shape is a result of her giving birth to a pair of twin babies three years ago.

But just about everyone else believes that Beyonce recently underwent a Brazilian Butt lift, and got her butt enhanced through surgery.

MTO News reviewed some recent footage of Beyonce, and her body looks amazing, but VERY different.

Here’s the video of Bey moving around:

And here’s a new pic of her wearing chaps:

Beyoncé is one of the world’s best-selling recording artists, having sold 118 million records worldwide. She is the first artist to debut at number one on the Billboard 200 with their first six solo studio albums.

Beyoncé’s accolades include 28 Grammy Awards, 26 MTV Video Music Awards (including the Michael Jackson Video Vanguard Award in 2014), 24 NAACP Image Awards, 31 BET Awards, and 17 Soul Train Music Awards; all of which are more than any other singer. In 2014, Billboard named her the highest-earning black musician of all time, while in 2020, she was included on Time’s list of 100 women who defined the last century.