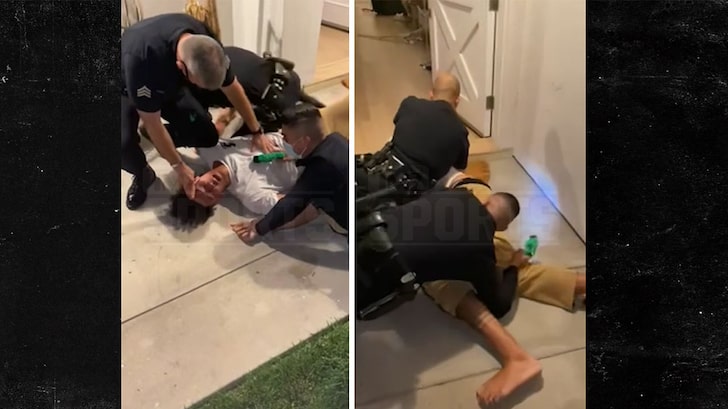 The clip starts with 21-year-old Hayes — the #8 overall pick in the 2019 NBA Draft — tussling on the ground with 3 police officers who are attempting to control and cuff Jaxson. One of the cops presses his taser against the Pelican center’s chest and shocks him.

Backup eventually arrives and the video shuts off as the man recording is approached by police.

Hayes was ultimately taken into custody around 3 AM before being treated at a local hospital for minor injuries sustained during the altercation. He was charged with resisting arrest … and posted a $25K bond.

On Tuesday, Los Angeles PD Chief Michael Moore announced the department launched an investigation into the arrest after Hayes alleged force was applied to his neck — causing him difficulty breathing.

It’s important to note the video we obtained starts with Jaxson on the ground and the taser against his body. TMZ Sports did not edit the starting point of the video.

However, what happened before the video starts rolling is critical … ’cause cops say Hayes is the one who started and escalated the physical confrontation.

Police claim when they arrived on the scene, Hayes attempted to enter the home — despite their commands — before he ultimately shoved an officer, injuring him.

“Body worn video captured Hayes repeatedly attempting to enter the
residence despite officers blocking his path and verbal commands for him to remain outside,” police said in a statement.

“Officers requested a backup and they attempted to place Hayes’ hands behind his back; however, Hayes broke free of the officers’ grasp and pushed one of the officers into a wall.”