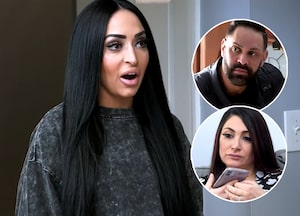 Angelina also confronts her marriage issues with Chris after splitting for a month.

Angelina Pivarnick was at the center of all the action on Thursday’s new episode of “Jersey Shore: Family Vacation,” as she had long-overdue conversations with both Nicole “Snooki” Polizzi and her own husband, Chris Larangeira.

Pivarnick had been estranged from Chris for about a month, after a number of fights between the two prompted him to move out. With Snooki, meanwhile, Angelina still had long-simmering beef over Nicole’s wedding speech — a situation that got so bad, it led to Nicole quitting the show for a season.

With Deena Nicole Cortese organizing a cast trip to the Poconos, Angelina had to hash out both issues, starting with the problems in her own household. Chris returned to the shared home with his suitcase, signifying he was ready to come home again. While she was thrown off by his beard — exclaiming, “Mother Mary, Joseph, motherf—!” — she was happy to see he had been working out, telling him “a breakup really does a body good.”

Following some awkward small talk — during which Angelina said she’s noticed he’s been “out every night” after making a fake profile to stalk on Instagram — the two got down to business. Both of them admitted they were lonely during their time apart, before Angelina said her lingering abandonment issues from her father — which Chris knew about — made the situation hurt even more.

“I didn’t like being abandoned, honestly. Even if you were mad, if I was mad. Running away from a problem is just not the way to do it,” she told him, before adding that she’s not ready to “just throw in the towel.” He said they should definitely go to therapy together and learn how to communicate better going forward. Angelina, meanwhile, acknowledged that the two often say “nasty” things to each other — and that’s just not okay.

The two seemed to have patched things up for now, though neither of them brought up accusations about the other being caught with other people. Chris was allegedly caught at a hotel with another woman, while Angelina was accused of discarding her chicken tenders outside a possible side-boo’s home in Old Bridge, New Jersey. We’re guessing both of these will be addressed later this season, but for now, they’re in a good place. 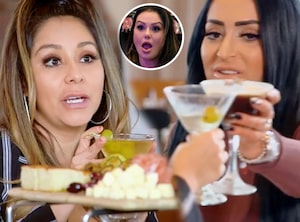 It was then time for Angelina to make amends with Snooki, who she hadn’t spoken to since the wedding drama. In case you somehow forgot, Snooki, JWoww and Deena gave a speech at Angelina’s wedding that was poorly-received. After getting booed by the other guests, Snooki decided to quit the show, saying it just wasn’t fun anymore. She took a full season off, before returning. Though they kept sniping at each other in  the press and social media, this is the first time they sat down face to face for a real conversation about the fallout.

“You took a longer break than I expected. I was very upset,” Angelina told her as they met up for much-needed drinks. “I needed it,” said Nicole, before launching into a long apology.

Yep, we’re still talking about the wedding. @snooki and @angelinamtvjs meet up for a drink (or 7) to FINALLY hash out the speech debacle. 👀 It all goes down on tonight’s #JSFamilyVacation. pic.twitter.com/PUIcNvtQaH

“Here’s my thing, I want you to know I didn’t maliciously mean to ruin your wedding or hurt your feelings. I am not that kind of person. I would never try and do that to somebody,” she said, before explaining that the girls got drunk and decided to write a “funny” speech instead of something heartfelt.

“That’s where I was coming from by calling you … with my speech and what I said. I thought it was going to be funny,” she continued. “And I felt bad and I just felt like it went overboard and I never meant to hurt your feelings. We were trying to be funny, we were drunk and it was stupid. It snowballed. I regret it and it was terrible and we probably should have said it at your bachelorette party. You would have loved it … if it wasn’t at your fairytale wedding.” 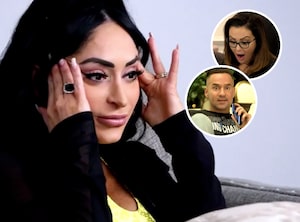 Jersey Shore Recap: Has Angelina Pivarnick Been Cheating on Her Husband?!

Angelina said the joke “landed wrong,” before admitting she should have waited to voice her frustrations the next day instead of making a scene at the wedding itself. After Snooki said she was sorry, Angelina too apologized for “what I did too.”

“I’d rather cut my left tit off than ever talk about this again,” joked Snooki, before the two toasted to “being friends again.”

With that out of the way, Angelina then started to fill Snooki in on her marriage woes, admitting that she and Chris hadn’t had sex in a while … and she wasn’t feeling much of a desire to do it now that he returned home. Nicole, meanwhile, said that anytime Jionni “whips it out,” she’s like, “Yeah, I’ll take it,” even when they’re mad at each other.

As they kept giving toasts to each other, Nicole eventually gave one to Angelina and “this guy in Old Bridge.” Pivarnick was caught off guard by the comment, before Nicole told her there was “evidence” of her being with this other man. That, of course, was a reference to the video Jenni received allegedly showing Angelina and this other guy together — video Angelina didn’t know they had. They planned to tell her about it when they all got to the Poconos … and Nicole jumped the gun. 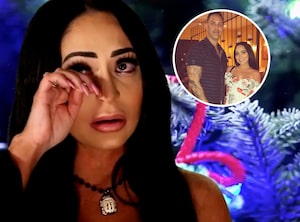 Angelina Reveals Chris Moved Out After Massive Fight, Caught at Hotel with Other Women

Angelina admitted to Snooki she had a “guy friend” that she sometimes hangs out with, but denied ever sleeping over at his house. “Unless you have video of me f—ing somebody or kissing somebody, it’s not s—,” she added. She said any alleged videos are “nothing,” telling Nicole she “got married for a reason and I’m going to take it seriously.”

After the cocktail hour, Angelina considered not going on the family trip anymore, telling Chris she didn’t “trust what the hell they’re trying to pull over here” with the videos. “They’re all too much in my business,” she added. Chris tried talking her off the ledge by saying, if they went, they could simply tell the gang they’re “working on things” between them and the rest wasn’t any of their business.

In the end, the two did decide to go on the trip, where Angelina hoped there would be zero drama. A preview for next week’s episode, however, proves the videos will be a major talking point. 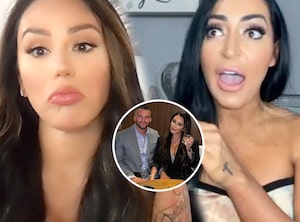