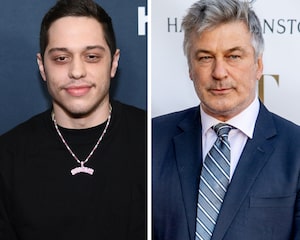 He first sparked speculation about leaving the show during the Season 46 finale.

Pete Davidson’s days at “Saturday Night Live” may be numbered.

In a Comedy Actor Roundtable with The Hollywood Reporter alongside fellow “SNL” star Chris Redd, the two were asked what they thought about possibly being on the show for 18 seasons, like costar Kenan Thompson.

“I would never do 18 seasons,” said Redd. “Yeah, I’m good,” added Davidson, “I’m surprised I made it to seven. I’m ready to hang up the jersey. Kenan’s like f—in’ Karl Malone out there.”

“He’s a legend for it and I think he can have that marker,” Redd continued. “Like, I’m definitely having a good time … But I don’t know how anybody does 18 years. It’s boot camp.”

Speaking with the publication, Davidson said he hopes to model his career going forward after fellow alums like Eddie Murphy and Adam Sandler.

“I like what Sandler did where he’s like, ‘These are my eight friends, we’re going to do this formula for the next 30 to 50 years,'” he said. “He built this entire universe for himself, and he’s in his own lane. That’s the model. Also, the way he carries himself I try to follow. He’s so kind to everyone, and you never hear of a Sandler issue — there’s never like a Sandler-gate. Any time you see that guy’s face, it’s associated with smiles and good vibes. That’s the thing I’m trying to follow.”

When asked which kind of roles he’d like to be cast in, Davidson joked he wants “to be the fifth or sixth guy in like a lot of movies.” He added, “You know what I mean? I just want to be that guy. I want to like, Buscemi my career real hard.” 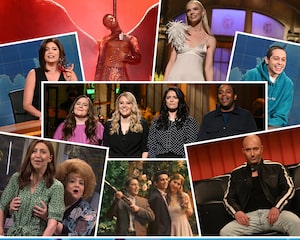 His comments come after he and many of his costars — including Kate McKinnon, Cecily Strong, Aidy Bryant and Kenan — sparked speculation they may be leaving the show on the Season 46 finale.

During his appearance on “Weekend Update,” Davidson ended his string of jokes on a more sincere note. “The pandemic has taught me that we never really know what the future holds,” he said into camera. “It’s also taught me to be grateful. I’m very grateful to be here, and it has been an honor to grow up in front of you guys, so thanks.”

Davidson will next be seen in James Gunn’s “The Suicide Squad” and is providing the voice of the titular dog in a new “Marmaduke” movie. He also joined the cast of the Vietnam War film “The Things They Carried,” a cast which also includes Tom Hardy, Stephan James, Bill Skarsgard and Tye Sheridan.