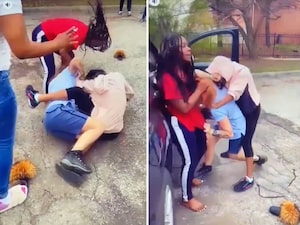 “Next time we’re going to Chick-fil-A.”

Some say McDonald’s cookies are to die for. Among them might be Tyler Newell, who made sure he finished his after getting caught in the middle of a parking lot shootout in an insane TikTok video.

The dashcam clip shows Tyler and his friend Zach grabbing some breakfast before an early morning round of golf on Friday, when all hell breaks loose right behind them.

Giggling at the amount of cop cars flooding into the lot, Tyler’s expression suddenly drops when they hear shots ringing out.

“Oh my gosh dude! Holy f— dude!”, Zach exclaims before the two dive for cover — but not before Tyler can shove the delicious remainder of his chocolate chip cookie into his mouth.

As they chance another peek, officers can be seen approaching a car with guns drawn, while Tyler tries to voice his shock at what he is witnessing, mouth still stuffed with baked goods.

But roars of “Put the gun down!” from the officers outside send the two pals diving for cover again.

“You want to get out in front of the car or you think we’re good here?” Tyler asks from beneath the dash as he — for some reason — winds up the back window. “Should I try to move? We’re in the line of fire, we’re behind those cops… I’m moving.”

Cue the Mission: Impossible music, as he begins reversing the car using his back-up camera.

The clip, captioned “In case of a shooting, always finish your cookie”, has been viewed more than 11 million times. In a video afterward, Tyler revealed that he and Zach had originally discussed going to Chick-fil-A, but opted for McDonald’s because Zach had some coupons.

He said that while they ate in the parking lot, the gunman had approached a car waiting at the drive-thru and opened the driver’s side door to use as cover. He did not say what became of the occupants of the car.

“Some shots got fired, we ducked. At this point we didn’t know that he had a gun, we assumed because the police started shooting,” he said. “But you never know.”

That’s when he heard the cops shout “put the gun down!” and he realized they were in the line of return fire.

“We could see the backs of the cops, so I was like, if he stands up and starts shooting we could get hit, so that why we ducked again,” he explained. “So for whatever reason I decide to roll the window up, like that’s gonna help.”

It was at this point he said he suggested getting out of the car to hide in front, because “I’d always heard that the bullet can’t travel though the engine block, so I thought maybe we were safer there.”

“And then the scene from Mission: Impossible came to mind when Tom Cruise is driving backwards using his back-up camera, and I was like: ‘Now’s the time.'”

To those wondering how he’s stayed so calm during the ordeal, he claimed he was actually a military veteran who’d served two tours in Verdansk … Verdansk being a fictional city in “Call of Duty.”

“Saw a lot of things while I was over there, so I guess it just kind of desensitized me,” he joked.

After escaping to safety and pulling over, he said the first thing he said to Zach was: “Next time, we’re going to Chick-fil-A.”

“This kind of stuff never happens at Chick-fil-A,” he insisted. “The employees would come out of the building and shield us from the bullets at Chick-fil-A.” 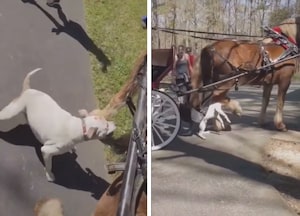