They wed three weeks after they tortured and strangled him to death.

A woman who murdered her sister’s boyfriend so her sister could marry their father has been sentenced to 40 years in prison.

Anna Marie Choudhary, 33, is the final person to be sentenced for the murder of John Thomas McGuire; after her sister Amanda Michelle Naylor McClure, 31, and father Larry Paul McClure Sr, 55, were both sentenced last year in a bizarre case that involved torture, incest and a sick “trust game”.

McGuire’s body was found in a shallow grave in West Virginia on September 24, 2019, seven months after he was killed, after Larry McClure led police to it; had he not, investigators admitted the trio likely would have gotten away with the murder, the Bluefield Daily Telegraph reported.

The court heard how Larry, who was initially estranged from both daughters, linked back up with them following his release from a 17 year sentence on child molestation.

In the days before the murder, all four went to Skygusty where they unsuccessfully tried to cook meth.

During her sentencing hearing Choudhary said things started to “get strange” after a Valentine’s Day dinner, when her father enticed McGuire to play “the trust game”.

McGuire’s feet were tied up, and when he tried to get out of it, Choudhary said her sister hit him over the head with a wine bottle.

Over the next three days, McGuire was hog-tied, tormented, and injected with liquid methamphetamine, until he was finally strangled to death with a garbage bag.

At his sentencing hearing, Larry had admitted putting the victim through “two to three days of hell.”

“A black garbage bag was wrapped around his head by Amanda,” he said at the time. “Anna strangled him… I held him.”

Prosecution described the so-called game of trust as “one of the most evil things I’ve hard of.”

Afterwards, Larry told investigators they had buried McGuire in a two-foot grave outside the house, before digging him back up, dismembering and reburying him.

Court documents show that Larry and his daughter Amanda were involved in an incestuous relationship, and had engaged in sex at the house where McGuire died.

Three and a half weeks after the murder, the trio crossed state lines to Virginia, so Larry and Amanda could marry.

“They took me and said I needed to act like a happy witness,” Choudhary said.

During Amanda’s sentencing hearing, she addressed McGuire’s mother Karen Smith about a possible motive for her son’s murder.

“Mrs. Smith, the only answer I can give you as to why things happened is John was with me,” she said at the time. “My dad didn’t want anyone else near me.”

Having pled guilty, Choudhary was given the maximum possible sentence for second-degree murder — 40 years — the same as her sister was given in October.

Their father is already serving life without mercy, having pled guilty to first-degree murder in August. 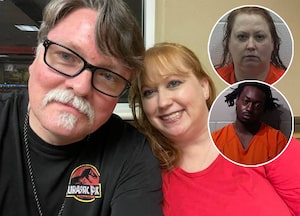