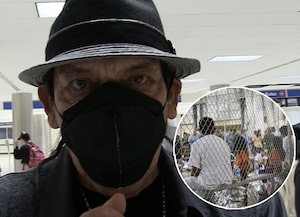 The tiny girls were then left to fend for themselves in the desert at night.

Disturbing footage from the US-Mexico border shows two little girls being dumped over a 14ft fence before being left to fend for themselves in the middle of the desert at night.

The video was shared by El Paso Sector Chief Patrol Agent Gloria Chavez on Twitter; the night vision cameras show the two coyotes on the Mexican side, one scaling the barrier while the other hands the children up to him.

One at a time, he hauls the little girls by the arm before dropping them to the ground with a crash on the far side. Without so much as a second glance to see if they are okay, the two smugglers then scurry off.

Luckily, border patrol agents were soon on hand to save the pair.

Smugglers, under cover of night, scaled a 14 ft. border barrier and cruelly dropped 2 young children in the middle of the New Mexico desert. The girls, ages 3 & 5, were left miles from the nearest residence. Thank you STN Agents for rescuing these children! @CBP @CBPWestTexas pic.twitter.com/U91y2g8Lk1

“Smugglers, under cover of night, scaled a 14 ft. border barrier and cruelly dropped 2 young children in the middle of the New Mexico desert,” Chavez captioned the video. “The girls, ages 3 & 5, were left miles from the nearest residence. Thank you STN Agents for rescuing these children!”

“I’m appalled by the way these smugglers viciously dropped innocent children from a 14-foot border barrier last night. If not for the vigilance of our Agents using mobile technology, these two tender-aged siblings would have been exposed to the harsh elements of desert environment for hours,” she added. 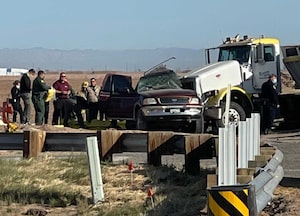 “We are currently working with our law enforcement partners in Mexico and attempting to identify these ruthless human smugglers so as to hold them accountable to the fullest extent of the law.”

Tens of thousands of migrants from South and Central America have reportedly attempted to cross the border since the change in administrations, many of them children, as border facilities creak under the increasing strain.

Last month, Texas Rangers and Border Patrol agents rescued a six-month old baby who had been thrown into the Rio Grande; according to the Texas Department of Public Safety, her mother had paid $3,500 to smugglers to get her across, but they turned on her and broke her leg, before leaving her baby to drown.

Last week alone, the bodies of six migrants were reportedly pulled from the same river having made tragic attempts to cross. 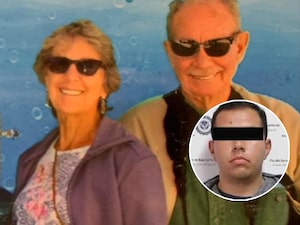