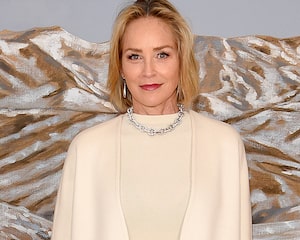 The surgery was supposed to be reconstructive, but the doctor went rogue.

Sharon Stone is the latest celebrity to open up about what really went on behind the scenes of her life with her new memoir, The Beauty of Living Twice — and, ahead of its release, some of the biggest or most shocking revelations are already being revealed.

In a new profile for The Times, the writer shares one of the more explosive claims from the book — in which Stone says she was given bigger breasts without approval during what should have been a reconstructive surgery following the removal of some tumors.

Writing that the tumors were “gigantic, bigger than my breast alone,” she says she woke up from her surgery to find her doctor had “thought that I would look better with bigger, ‘better’ boobs.” She continues, “When I was unbandaged, I discovered that I had a full cup-size bigger breasts, ones that he said ‘go better with your hip size.’ He had changed my body without my knowledge or consent.”

“When I went to the Golden Globes as a nominee in 1993 and they called my name as a finalist, everyone laughed,” she recalled. “It was really hard to be me after that movie came out. They probably thought I was the character. They wanted to believe I was the character.”

“Easier to believe I was the character,” she added. “Isn’t that always the case? It’s not like people run around telling women, ‘Congratulations, you’re so f—-ing talented, I didn’t even imagine!'” 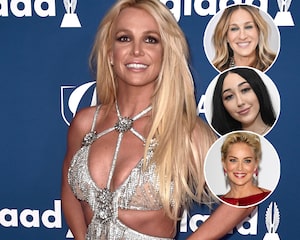 Britney Spears Reveals Her Quarantine Inspirations — And Some of the ‘Cool Ladies’ Respond!

Stone also claimed that, before she landed the role opposite Michael Douglas in the film, the two nearly came to blows years prior at a party.

“I met him a long time before. He immediately got into an argument with me. We almost got into a fist fight,” she said, adding that the altercation went down when he was famous, but she was not. “I was talking about another family that we both know, but he didn’t know I was intimately connected to this family. I said something about the son, and he’d be like, ‘Oh, he’s half the guy his dad is.'”

“And he just was furious, said something to me, and we were sitting in a big group. I looked at him, and I thought, ‘What?’ Because he just went at me!” she continued. “I said, ‘I think we should step outside’ … and he went, ‘I think we should.’ And there was, like, 20 people, and everybody was going, ‘Oooooooh!’ We went outside and I was like, ‘You don’t know me,’ and he’s like, ‘And you don’t know me.’ And we had this fantastic, you know, high school argument.”

The two would later costar in the 1992 thriller, with Stone saying the duo have “a beautiful relationship” and “knew immediately how to push each other’s buttons.”

“The Beauty of Living Twice” is out Tuesday, March 30.