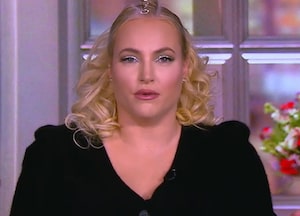 McCain reacts to some of the criticism she gets from viewers and the on-air disagreements with her cohosts.

In the midst of yet more viewer backlash for comments she’s made on “The View,” cohost Meghan McCain defended her place on the show and spoke out about some of the criticism she gets from both the audience and some of her coworkers.

Speaking with DailyMailTV, McCain was asked about some of the verbal disagreements she has with her fellow panelists — namely, Joy Behar, who once said she didn’t “miss” Meghan at all during her maternity leave.

“I know my job,” said McCain. “I know that I am here to give an opinion that isn’t always the one people want to hear. And I think there’s no crying in baseball. And I signed up for this.”

“It’s live, crazy TV,” she continued. “I think sometimes the idea that I’m like the supervillain on the show and that we all don’t get along is just not accurate and it’s unkind.”

Saying the women all have “great respect for each other,” she said she wished that viewers and the media covering the show would “give us a little break sometimes.” 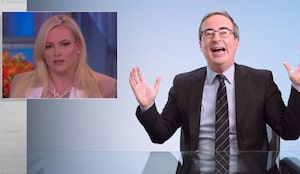 As she is often the target of online criticism or her cohost’s frustrations, McCain said that it is sometimes “hard” for her. “My brother Jimmy is always like, ‘Is it hard being on TV and getting your makeup done? Megan, I went to Iraq,'” she added. “So, I have my brothers to keep me in check when I feel sorry for myself.”

McCain repeated the “There’s no crying in baseball” mantra from “A League of Their Own” in reaction to some of the backlash she got on Wednesday after arguing race and gender shouldn’t be more important than being qualified for a job — while totally ignoring the unequal playing field for women or POC.

“I’ve accumulated tough, crocodile skin being in this industry as long as I have,” she tweeted after becoming a trending Twitter topic for her comments. “I know who I am and what I believe in this world — just glad I can keep so many (many!!) of you talking and thinking even if it’s that you hate me and my opinions.” 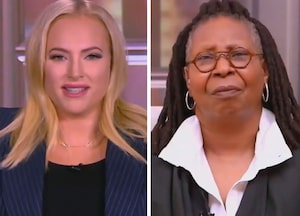