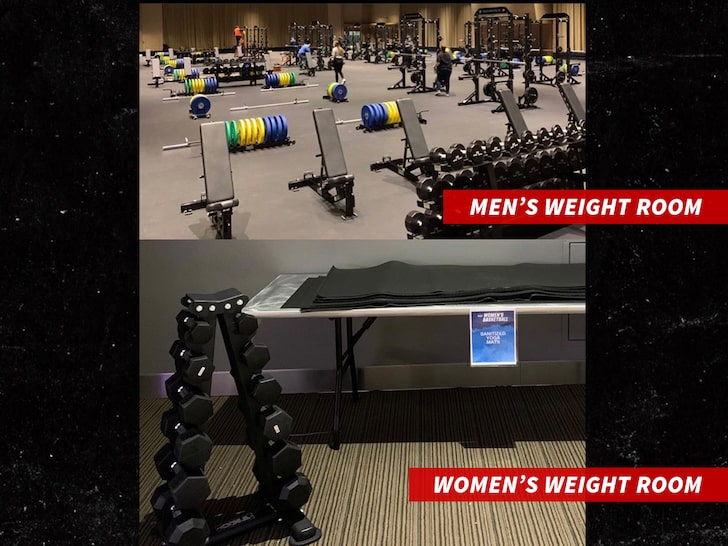 The NCAA is ADMITTING it gave the men’s tournament teams a better weight room set up than the women — but it’s blaming the disparity on a lack of space.

It all started when Stanford’s performance coach, Ali Kershner, exposed the difference in the two setups Thursday on social media … showing a giant workout area for the men in Indianapolis complete with machines, benches, racks, etc.

The women in San Antonio got stuck with yoga mats and 6 sets of dumbbells.

The post drew outrage from WNBA star Sabrina Ionescu and NBAers like Ja Morant and CJ McCollum … who blasted the NCAA over the disparity.

NCAA VP Lynn Holzman tried to justify the difference by claiming they simply couldn’t find the space for a larger, more comprehensive training area … and the organization was working on getting more equipment to the women’s facility.

“We acknowledge that some of the amenities teams would typically have access to have not been as available inside the controlled environment,” Holzman said.

“In part, this is due to the limited space and the original plan was to expand the workout area once additional space was available later in the tournament.”

Oregon Ducks player Sedona Prince was quick to call B.S. on the NCAA … sharing a video of plenty of open space at the women’s facility.

Let me put it on Twitter too cause this needs the attention pic.twitter.com/t0DWKL2YHR