“It just became like an impossible relationship to keep carrying on with,” he says of their split on the season premiere of “Keeping Up with the Kardashians”.

Scott Disick’s relationship with Sofia Richie fell apart on Thursday night’s Season 10 premiere of “Keeping Up with the Kardashians” — and Kourtney Kardashian was at the heart of it all, whether she meant to be or not.

The season began with Khloe Kardashian asking Scott where all of Sofia’s stuff was as she stopped by his home. “Does Sofia live here or stay here?” she wondered. “No,” he said, before revealing she had moved out and the two were taking some time apart. While the pandemic clearly played into their break, that wasn’t the only problem.

“Life gets really weird when you’re living with someone and life gets so small and you’re spending 24 hours a day with people. You can look at the news, see people are getting divorced left and right and I definitely think it did create a problem between Sofia and I,” he explained. “I think we kind of saw some things in each other that wasn’t us being on the same page, I guess. I totally realized I am not your average single guy, I do have 3 children, I have an extremely close relationship with my kids mom and its some baggage. it’s designer baggage, but its still there.”

He later met up with Kourtney, where the two also talked about Sofia and their close relationship with each other.

“I just think people come into our lives and think it’s maybe easier than they think — to be with you or to be with me,” he told his ex. “It’s like very true that we do come with a lot of baggage and it’s definitely not easy that we see each other, work together and are friends.”

He said his kids have and always will be his top priority, while “taking care” of Kourtney was also high on that list. In a confessional, Scott gave props to Sofia for being a “trooper,” but admitted it must be hard for anybody to see the person they are dating hanging out with their ex.

“I appreciate that he prioritizes me, but I think the biggest thing is I want him to prioritize himself,” Kourtney said in her own confessional, adding that she hoped they could be as close as her parents were after they separated.

Though she never appeared on camera throughout the episode, Sofia did hang out with Scott around the time they were filming. He told Khloe that she came to him and laid out why she felt insecure in their relationship and why it was “so difficult” for her to be in it. He claimed she said she liked being the “center of attention” and, in his life, she was “the last person” who gets it.

“It’s very honest and true and super mature about it and said, ‘I just want to be there for you but how can we figure things out where I feel comfortable?'” he added, saying the two would continue spending time together and see how it shook out. “I totally understand where she’s coming from and she totally deserves to have more attention,” he said, “Sofia and I have been together for 3 years and now that we’re back together, I want to try and make our relationship work to make her feel like she’s the priority and see where that goes.”

While he seemed optimistic, the Kardashian family thought Sofia had a point.

“It’s gotta be a lot for somebody her age to be dating Scott, he has 3 kids and the drama of Kourtney,” Kris said as she, Corey Gamble, Kim, Khloe and Kendall relaxed by the pool. “Over time, that would be hard to handle. I’ve thought about that. That would be hard for me. Most women wouldn’t put up with that.”

Kim agreed. “If I was in Sofia’s shoes I would be like, this is absolutely not normal and I can’t take it,” she said. “In Kourtney’s shoes, I still think there should be a bit more structure. I love how open they are, but it’s as if they’re together, but no sexual anything.” 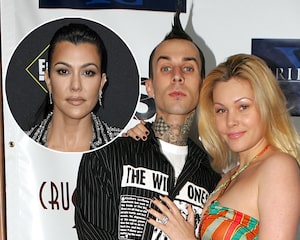 The next time Scott appeared on screen, he said things between him and Sofia had “definitely taken a turn” … and not for the better.

“I thought I would give it a try and make her more of a priority, but even doing that, I feel like she just started wanting to push Kourtney out,” he told Khloe and Kim. “I said, that’s the most important thing to me, my kids and my family and the only family I have. She was like, ‘I don’t want to share you as a boyfriend with Kourtney,’ and then she literally said, with an ultimatum, ‘You have to choose me or Kourtney.'”

“And I was like, ‘Kourtney is Kourtney and my kids, it’s a unit,'” he continued. “I said, ‘How could you even want that for me?’ It just became like an impossible relationship to keep carrying on with. I need to be with somebody I trust with all my heart. I trust Kourtney with my life. If you can’t trust somebody, you can’t have anything.”

In a confessional Scott was adamant he would never give up his relationship with Kourtney, saying “nothing in a million years will be worth what we have.” He added that the “right person” for either of them would understand the dynamic and only see it as a plus.