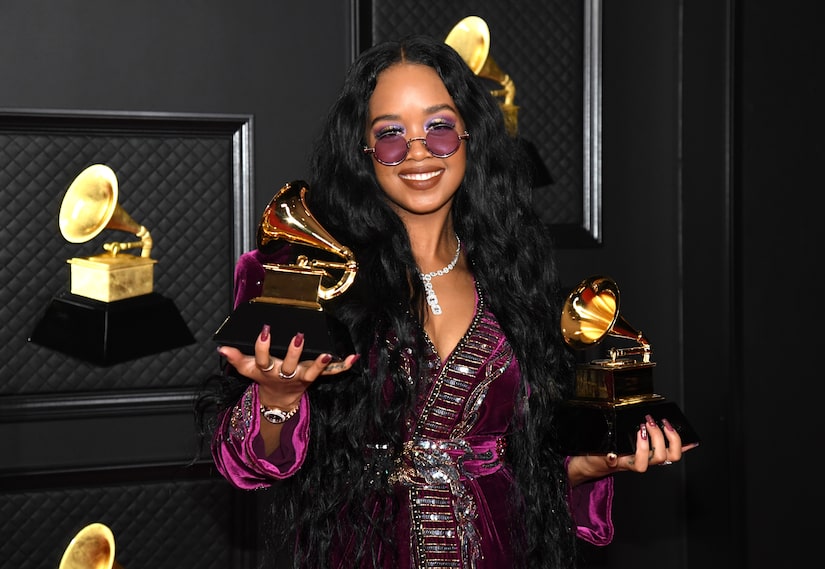 Singer H.E.R. is having the best week ever!

“Extra’s” Rachel Lindsay spoke with Grammy winner H.E.R., who was also just nominated for an Oscar for co-writing “Fight for You” from the movie “Judas and the Black Messiah.”

H.E.R. said, “It feels crazy. I don’t even know how describe this feeling. I feel so blessed… and for two different songs. It’s like… wow!”

H.E.R. said she loved how many women triumphed this year. “There was a lot of women who won Grammys… and that was just so dope to see, a lot of dope women, Billie [Eilish], Meg[han Thee Stallion], Dua Lipa and, of course, Beyoncé. She waved at me, so I was like, ‘I can leave happy.’ Beyoncé waved and she gave me a standing ovation.”

When Rachel noted, “You’re nominated for an Oscar, you just won another Grammy, and we still all fan out over Beyoncé?!”H.E.R. answered, “Absolutely, absolutely.”

Now her parents have another reason to be proud — Oscar gold is on the horizon. H.E.R. dished, “My phone was blowing up. There was all kinds of people texting me — management, friends, and family saying congratulations and I was like, ‘Oh, my gosh… Oscar nominee… going crazy.”

As for what it means for her nomination to be attached to “Judas and the Black Messiah,” the dramatic story of Black Panther leader Fred Hampton and his betrayal by FBI informant William O’Neal, H.E.R. said, “Just to be a part of something so powerful, for us by us… even though it’s so tragic, I think it gives us hope at the same time. That was really the goal with the song.”

Along with singing, H.E.R. has hopes of expanding her career into acting. She pointed out, “I’ve always been really passionate about acting, but music has had to come first. But I want to put in the 10,000 hours and put in the work and be respected and just not be the musician who wants to be an actress. It’s something that I’m so, so passionate about — so, yeah, I’m diving in for sure. You might see me on the big screen pretty soon.”