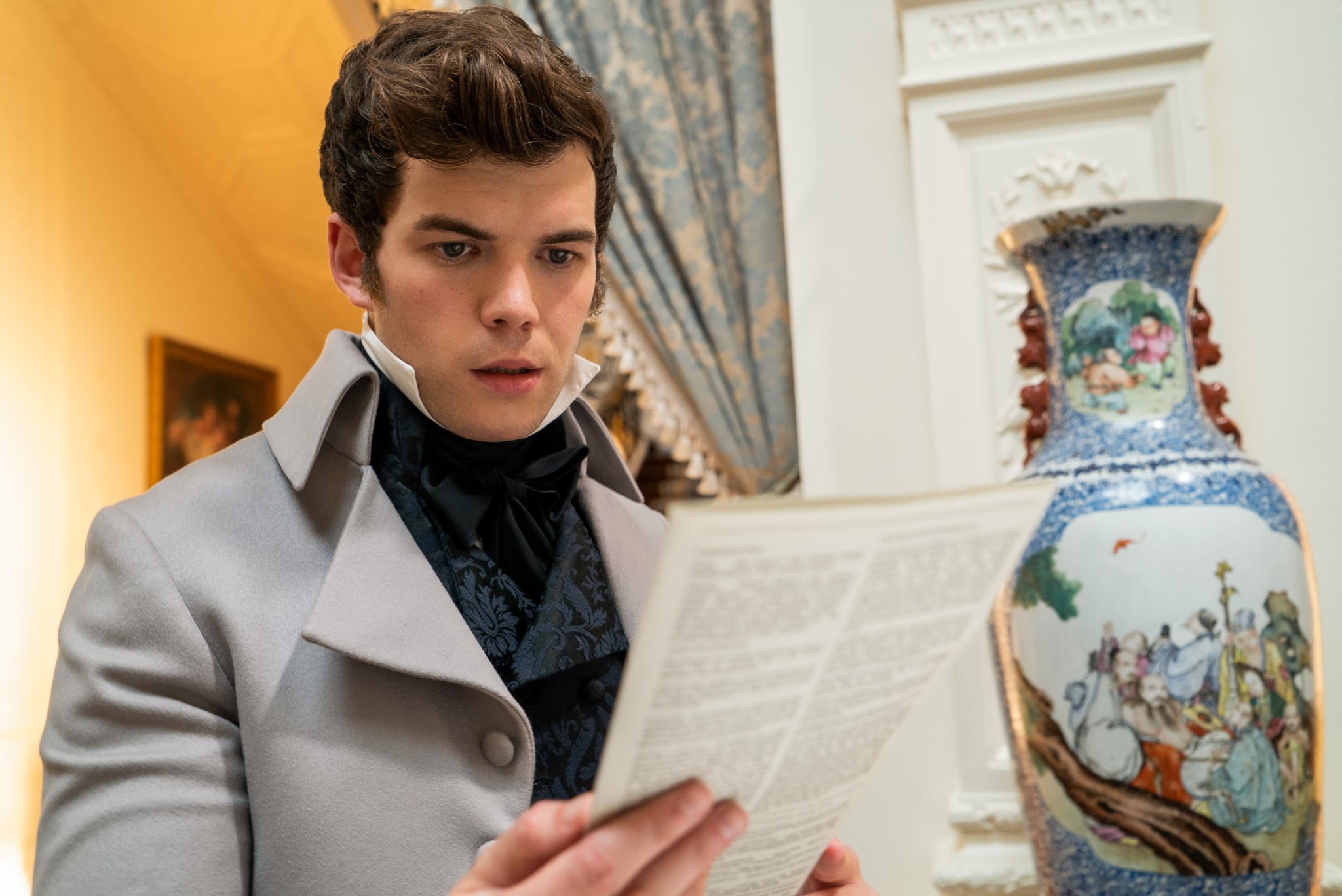 In our Q&A series POPSUGAR Crush, we get to know some of our favorite celebs’ more intimate details — from their go-to pickup lines to their ideal first dates. This week, we’re crushing on Bridgerton star Luke Newton.

You probably recognize Luke Newton from his turn as the object of Penelope Featherington’s affection, Colin, on Netflix’s Bridgerton. While many were thirsting after the Duke or one of Colin’s brothers, the 24-year-old stole each and every scene he was in. Not to mention, a few hearts along the way. In honor of Bridgerton being one of the buzziest shows on television and its recent season two announcement, we asked Luke the tough questions, including whether he is Team Duke or Team Prince. Hint: he’s as big a fan of Simon like the rest of us. Read ahead to see what he had to say.

Dogs, definitely. I’m a bit intimidated by cats. It’s the way they can just stare at you and there’s no movement or reaction. It’s just a stare. No idea what they’re thinking. Whereas, I just love dogs to bits.

Actually, this Christmas again, because it’s like my go-to present from the family, I got [Dior] Sauvage. Some people in England say “Savage,” but I think Sauvage is right. I just love it.

It’s going to sound really boring, but just somewhere hot and warm right now because it’s been so long for me. I guess Greece, where Colin goes, would be quite nice. I’m kind of hoping with the announcement of Bridgerton season two maybe I’ll get sent out there for a couple of weeks for a bit of research. That’d be quite nice.

Maybe just like the wink or the wink and smile. Something cheeky and not too creepy.

Colin’s at the Trowbridge Ball, I think. He says, “May I have . . .” Oh, God, as if I can’t remember it now. That’s so awkward. Something to do with, “Could I take a dance?” or something. I got to keep it classy. I don’t want to go down a horrible route. A nice, old-fashioned, “Would you like to dance?” Let’s go with that.

The Featherington colors have been received so well. I’ve seen so much online, but I think I have to stay true to my fellow Bridgerton family and say alphabet.

Oh God, that’s hard. I think for Colin, it has to be Team Duke because I know there are definitely references, especially through the first book where Colin quite admires the Duke quite a lot. Even though it’s not written so much, there obviously is a protective side of Colin. I definitely tried to put elements of that in the series where he looks up to him. Colin’s also an aspiring boxer, so I’m going to have to go Team Duke.

Are you more likely to make the first move?

Oh, I don’t know if I am. I can actually be quite shy. I think sometimes people would think that I have a lack of interest or that I’m being too abrupt or seem rude. Back when we could have parties last, I remember wanting to introduce myself to a group of people, but I just felt quite intimidated. And I was like, “Oh, I don’t want to.” So, I had to get a mate to be like, “This is Luke. He’s my friend.”

I’m from Brighton in the South Coast of England, and there are some really cool vintage-y bars that you can go to where people do dancing. I don’t even know what style the dancing is, but it’s like ’50s-style dancing. So, maybe somewhere like that, where it feels like you’re time traveling a little bit. I’ve been there with friends before and it’s just such a cool vibe. I think that would be my go-to once everything’s up and running again.

What is the most romantic thing you’ve ever done for a partner?

I did a surprise trip for my girlfriend, [Jade Louise Davies]. I took her to Amsterdam last year and she’d been mentioning for ages that she needed a new suitcase. She didn’t have a little holder suitcase. It had broken, so when it was leading up to Christmas, I got her a case and I was like, “Oh, before we go, I’ll give you this case you can use. Merry Christmas.” And then she opened it and inside was the boarding pass and it said we’re leaving tonight.

What is the most romantic thing that’s been done for you?

The most romantic thing for me is that [my girlfriend] made me a book with photos from our entire relationship and every special occasion, like the date, where we were, and what happened. She’s got an amazing memory, much better than mine, so it’s kind of nice to me to look back and go, “Oh, that’s what we were doing that day” rather than just remembering the photo.

Be honest and be yourself from day one. A lot of times people can mask who they really are until they feel comfortable enough, but if you’re going to go for something that’s going to be a big commitment, I know this is taking this back to Bridgerton, but the whole theme is about love and finding love and I think that’s what anyone wants to do, really. So, it’s kind of like, if that’s so important in people’s lives, just be you from day one. And if that person doesn’t like that, then move on. Move on if they’re not right for you.

Finally, Do you think that Colin has any idea that Penelope is in love with him?

I’ve been thinking about this recently. I think I got asked the same question, but it was more abrupt in terms of, “Is Colin just a dumbass because why doesn’t he know?” I think his personal experience of growing up has led him to, one, think of Penelope as a really close friend. They’ve known each other for years. Colin’s also flirted with half the girls in London and he’s very much an eligible bachelor of the time. I think he may have had hundreds of encounters with women of the ton and Penelope’s attempt is somewhat different to the rest of them, so he sort of sees it as a friendship right now.

I didn’t really expect that to come through in the first season as much as it did, because I know that if we were to go in order of the books, Colin and Penelope’s story is the fourth book. I was really pleased to see in the script and then how it came out in the final edit. There was hints of that already, which is so exciting to watch. I can’t wait to see the [season two] scripts. I’ve actually got some fittings coming up soon, which I think will suggest to me what’s happening with Colin at the beginning, like where he is in the world and what’s going on. That’s going to be the first step for me to go, “OK, this is what’s going on. Cool.”