“Good Morning Britain” co-host Alex Beresford has issued a statement about Piers Morgan’s resignation from the show, following an on-air clash over the latter’s treatment of Meghan Markle.

His statement comes after Morgan quit the morning show on Tuesday, after Beresford called out the longtime host for “[continuing] to trash” Markle regularly following a personal slight. Morgan walked off during Beresford’s commentary and never returned.

“Over the last few years, Piers and I have had a lively, cheeky on-air relationship,” wrote Beresford on Thursday. “We both wanted to be on the show Tuesday morning, and from our very public conversations on Twitter, we both knew how strongly our opinions differed on the treatment of Harry and Meghan pre and post the interview that has split the world.”

“I hoped we could reach a place of understanding. It’s sad that we weren’t able to get there, but challenging his opinion was not an outrage,” he continued. “On this occasion, we have to agree to disagree.”

He added that he “didn’t want [Morgan] to quit, but I did want him to listen.”

During the contentious moment, Beresford told his co-host, “I understand that you don’t like Meghan Markle, you’ve made it so clear a number of times on this program.” He added that Markle is “entitled to cut you off if she wants to” and didn’t find it appropriate that he continued to trash her. “Okay, I’m done with this,” Morgan said at that point, before walking off set.

The dust-up began after Morgan said Monday he didn’t believe Markle’s mental health claims during her sit-down with Oprah Winfrey.

“Personally, Piers has always supported my growth,” Beresford concluded. “He’s given me advice on several occasions and for that I am grateful. I wish him well!”

Morgan released his own statement late Tuesday night, doubling down on his stance.

“On Monday, I said I didn’t believe Meghan Markle in her Oprah interview. I’ve had time to reflect on this opinion, and I still don’t,” he wrote. “If you did, OK. Freedom of speech is a hill I’m happy to die on. Thanks for all the love, and hate. I’’m off to spend more time with my opinions.” 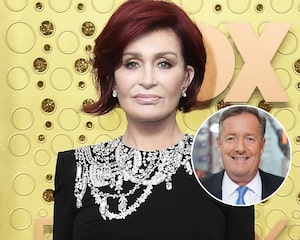 Piers Morgan Responds to Sharon Osbourne Standing By Him Amid Backlash