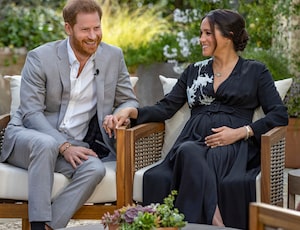 Harry said he “pushed back” after his security team was pulled in 2020.

Prince Harry and Meghan Markle found an unlikely ally in the middle of their fallout from the rest of the royal family: Tyler Perry.

According to the couple’s interview with Oprah Winfrey on Sunday night, the Hollywood mogul offered up his Los Angeles home as a temporary sanctuary for the two and their son Archie — and threw in extra security, to boot.

As Harry explained, the two found themselves in the middle of a bind when they learned, “short notice,” that their “security was going to be removed” after they relocated to Canada. The change — which was to take effect right before Covid lockdown began — had to do with the two taking a step back from royal duties and wishing to become non-senior members of the family.

“The biggest concern is when we were in Canada, I then got told, short notice, that security was going to be removed,” Harry said. “At this point, the world knew our exact location. So suddenly it dawned on me, ‘Hang on, the borders could be closed, we’re going to have our security removed, who knows how long lockdown is going to be, the world knows where we are, it’s not safe, it’s not secure, we probably need to get out of here.'”

“We didn’t have a plan, we needed a house and he offered his security as well,” Markle said of Perry. “He offered us breathing room to try to figure out what we were going to do.” 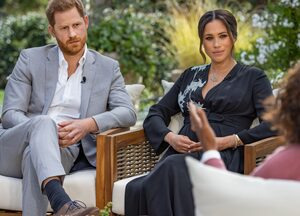 When Oprah wondered why the decision was made to pull their protections, Harry said their justification was the couple’s “change in status” — adding that he “pushed back” and asked whether there was “a change of threat or risk” for him. “After many weeks of waiting, eventually I got confirmation that no, the risk and threat hasn’t change, but you two are change of status and would no longer be official working members of the royal family,” he added.

Markle went on to explain that the two never “left the family” and only wished to become non-senior members, a type of role which already existed. “We weren’t reinventing the wheel here,” she said, adding that they hoped to “take a step back” and even offered to do it in another commonwealth country.

Harry added that the two just wanted to “take a breath from this constant barrage” of negative and racist press, especially if the institution wasn’t going to do anything to help them. “My biggest concern was history repeating itself,” he added, referring to his mother Princess Diana. 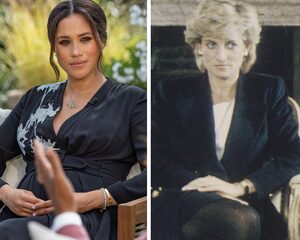 “I never thought that I would have my security removed because I was born into this position, I inherited the risk,” he added. “So that was a shock to me. That was what completely changed the whole plan, for what we have planned.”

Markle got involved as well, telling Oprah she wrote letters to his family members pleading for his security to stay intact.

“Please, it is clear the protection of me or Archie is not a priority. I accept that, that is fine,” she said she wrote. “Please keep my husband safe. I see the death threats. I see the racist propaganda. Please keep him safe. Please don’t pull his security and announce to the world when he and we are most vulnerable.’ And they said, ‘It’s just not possible.'”

After three months at Perry’s, the two and Archie purchased their own home in Santa Barbara — right down the way from Winfrey. 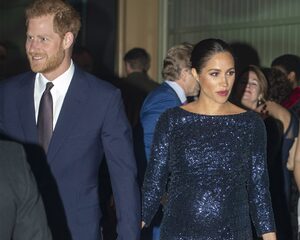 These Photos, Taken the Day She Told Harry She ‘Didn’t Want to be Alive Anymore,’ Still ‘Haunt’ Meghan Markle