Actor Ioan Gruffudd, 47, is officially pulling the plug on his 13-year marriage to Alice Evans, 49.

The Blast reports Gruffudd filed for divorce in Los Angeles.

It is unclear if a prenup is in place and if Evans will request spousal/child support.

Last month, Alice opened up about how heartbroken she was about their split. She wrote on Instagram, “I never thought this would happen to us. I am still fighting against it, because I love our kids, and I still love him, but something has happened inside his head and whatever it is, I don’t see him coming back to us.”

“The pain is excruciating but I am stronger than an ox, and though I weep all day when my kids aren’t looking, at night I add up figures and plan futures for us and you know what? I will do those two angels right if it’s all I ever do.!” Alice continued.

In January, Evans announced that Gruffudd was leaving their family. She tweeted, “Sad news. My beloved husband/soulmate of 20 years, Ioan Gruffudd, has announced he is to leave his family, starting next week. Me and our young daughters girls are very confused and sad. We haven’t been given a reason except that he ‘no longer loves me.’ I’m so sorry.” 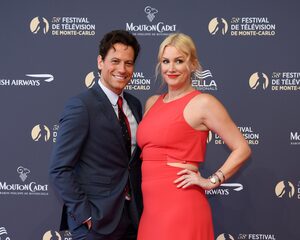 She continued, “And hell yes when I am being gaslit and mentally tortured then hell yes I will wash my linen in public.”

In a joint statement to People magazine, the couple said, “As you can imagine, this is an incredibly difficult time for our family  and we remain committed to our children. Thank you for respecting our  privacy.”

Last year, Ioan opened up about his marriage to The Guardian, admitting they “struggled the past four years, making time for each other because physically we’re apart.”

Of their busy schedules, Ioan noted that they were “very practical about the whole thing.”

Ioan and Alice met as co-stars on the 2000 Disney flick “102 Dalmatians.” They tied the knot seven years later.

Ioan has starred in “Fantastic Four,” “W.,” “San Andreas,” and “Ava,” while Alice has appeared on “The Mentalist,” “The Vampire Diaries,” “Lost,” and “The Originals.”