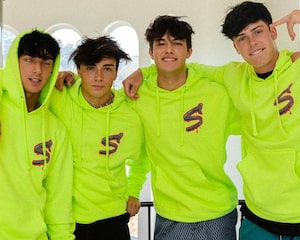 “I have this opportunity that 99.9% of the world will never get, and there’s no time to waste so, I’ve gotta go full throttle,” Josh told TooFab.

TikTok sensation Josh Richards is trading in his iPhone and taking a leap into the big leagues to help produce content for Gen Z audiences all around the world!

While speaking with TooFab Richards opened up about how the once in a lifetime opportunity came to be: “I’ve been really focusing on content, and I had all these series ideas to build out, and some shows I kind of wanted to create, and the conversation ended up going into the area of let’s create a production company together.”

“The coolest part of this is teaming up with Mark. He’s an idol to me. I’ve always looked up to him. The way that he’s been able to pivot his career from modeling to acting to running a restaurant,” The 19-year-old influencer gushed about working with Wahlberg. “Just absolutely killing it in multiple fields… like he’s a titan.”

Why Sway House Is No Longer ‘A Thing Anymore’

Earlier today, Richards took to Twitter to share the exciting news and said, “When I first moved to LA to pursue this dream of a career, one of my goals was to meet @markwahlberg. I thought that was dreaming big. However, today, thanks to the hard work @Michaelgr1011 and I have put in, I am proud to call Mark a business partner!”

Further showing his admiration for the actor, Richard’s tweeted: “Anyone who knows knows that my two favorite actors are @markwahlberg and Will Smith. Their talent is unrivaled and they understand the value of making a societal impact and entrepreneurship. They are moguls and are the two people I strive to become.”

Today’s announcement is nothing short of surreal for me.

Take this away from it:

Richards also opened up about some advice the “Ted” star gave him: “He’s just seen the hustle and told me how he respects it and that I gotta keep going. I’m going down the right route here with the hard work and really focusing all my time on this. So, I just think continuing to work hard.”

With over 24.2 million TikTok followers and 7.4 million Instagram followers, Richards knows how lucky he is to be given such an amazing opportunity that “99.9% of the world will never get.”

As for what to expect in 2021, the 19-year-old CrossCheck Studios CEO said, “Definitely be expecting a docuseries, or something along the lines of that with this production company and hopefully some Emmy nominations or something!”

Earlier this month, Sway House made headlines after announcing they’re officially no longer “a thing,” but Richards explained that they still remain close pals. “I’m at the Sway house right now with Bryce, Blake, Griffin, and Noah. So, we all still hangout on pretty much a daily basis.”

Having completed two independent films in 2018, “Under The Stadium Lights” and “Summertime Dropouts,” Josh has been slowly transitioning from social media to TV and film. It all started, he says, when he was just 14 years old and his sister put out a video on Muscial.ly, now known as TikTok, that gained a lot of traction online. 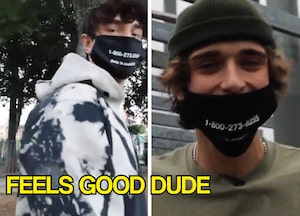 “She just ended up putting me in this video and it ended up doing really well on her account. It got a lot of traction, and I’m a competitive person so I decided I was going to hop on and try to see if I could get 10,000 on this app in two months. So, with that I just went around it in a really business minded way, and hired my sister. Put her on a 15% commission based salary and just started,” Richards continued. “I was getting the most engaged fans on the app, and that just slowly built out my fanbase, and I got to go on tour in 2019. Throughout that I always had a large passion for entertaining, but also being in front of the camera.”

Josh also shared some words of wisdom for his fans to follow and said, “If you don’t dream, you can’t achieve! There’s still a long way to go, but if I can get this far, so can you.”

To be the first to find out the latest up-to-date news on whats expected to be released follow CrossCheck Studios on Instagram. 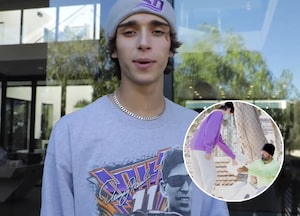