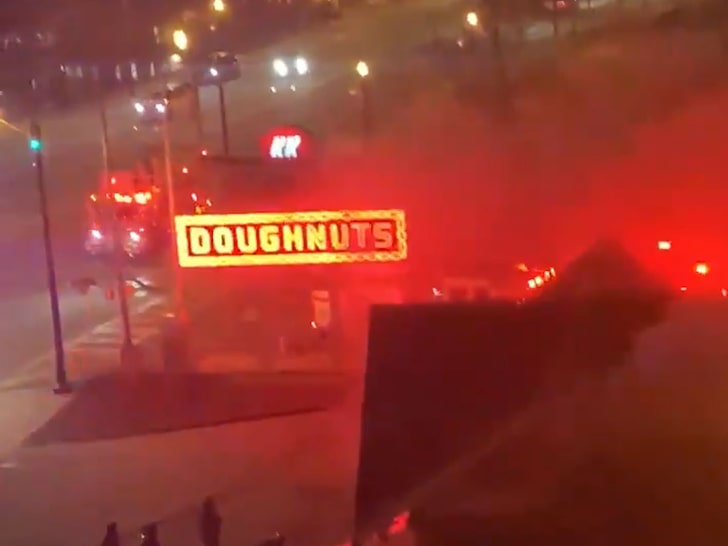 The historic Krispy Kreme donut shop in Atlanta — which is owned by Shaq and has ties to Martin Luther King Jr. — was “gutted” in a massive fire Wednesday morning … but the NBA legend has vowed to repair it.

The fire broke out at the Ponce de Leon Ave. location just after midnight while 2 employees were still inside the shop.

Both staffers were able to escape without injury, but the structure took heavy damage before Atlanta Fire Rescue was able to extinguish the blaze.

Atlanta Firefighters are still hitting hot spots this morning at the iconic Krispy Kreme located on Ponce de Leon. A fast moving fire gutted the building this morning just before 1am. Two employees were able to escape without injuries. #KrispyKreme #AFRD pic.twitter.com/2XWUpQOdJF

“A fast moving fire gutted the building this morning just before 1 am,” Atlanta Fire Rescue said in a statement.

Video of the blaze is wild — it’s a miracle no one was hurt. 11Alive’s Joe Ripley reports the back of the structure was badly damaged and the famous giant donut menu was melted.

Shaquille O’Neal bought the shop back in 2016 — noting its importance to the community … and to the country.

It first opened in 1965 — one of the first Krispy Kreme shops outside of the company’s headquarters in North Carolina.

In fact, after Martin Luther King, Jr. died in 1968, that specific shop donated 150 boxes of donuts to locate churches to feed the mourners who flocked to Atlanta to pay their respects.

Shaq issued a statement on the blaze early Wednesday morning … saying, “”I hope no one was hurt and we will bounce back better than ever.”