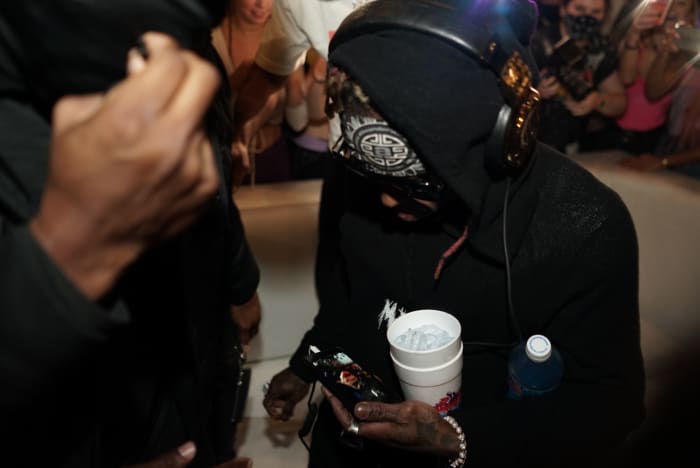 Lil Wayne was spotted at a maskless party in Miami and appeared to be high out of his mind, less than a week after being pardoned by President Trump MTO News has learned.

The Rapper arrived to host a party wearing no mask, in one hand he was holding a blunt, and in the other Weezy had a styrofoam cup filled with a purple liquid – believed to be Codeine syrup.

Wayne was surrounded by large bodyguards, all of whom wore masks. The bodyguards appeared to be the only people in the entire club wearing a face covering.

Trump granted a full pardon to Lil Wayne, whose real name is Dwayne Michael Carter Jr. The rapper was charged in Florida on Nov. 17 with possession of a firearm by a convicted felon, a federal offense that carries a potential sentence of up to 10 years in prison.

“Brett Berish of Sovereign Brands, who supports a pardon for Mr. Carter, describes him as ‘trustworthy, kind-hearted and generous,’ ” read the White House’s official statement. “Mr. Carter has exhibited this generosity through commitment to a variety of charities, including donations to research hospitals and a host of foodbanks.”

Kamala Harris CALLED THE B WORD BY HER NIECE ON TIKTOK

Carter took to Twitter Thursday to send gratitude to Trump.

“I want to thank President Trump for recognizing that I have so much more to give to my family, my art, and my community,” Carter tweeted. “I also want to thank @bradfordcohen for working so diligently to secure another chance for me. Love!”

Drinking prescription codeine syrup in public is a felony in Florida. Wayne might need another pardon.