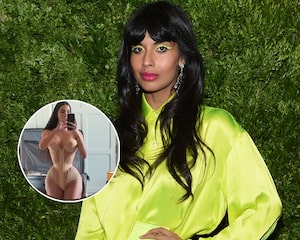 Jameela Jamil is once again calling out celebrities and influencers for promoting diet culture.

On Friday morning, the actress and I Weigh founder shared a lengthy message to Instagram, in which she urged those with a large platform to stop “pushing” the ketogenic diet in particular, saying the low-carb, high-fat diet can cause “disturbances for people’s bodies.”

“CELEBRITIES AND INFLUENCERS. Please stop pushing the keto diet to people who do not need to follow the diet for medical reasons,” Jamil began in the message. “It can create all kinds of disturbances for people’s bodies, (including their VITAL ORGANS), and they do not have the same access to healthcare that you do.”

She continued, “Stop with the (often bullshit) before and afters (especially the ones where in the ‘after’ your trousers are higher/your bra is more supportive/your hair and make up is done/you’re smiling/the lighting is better/you’re using airbrushing….) during the predatory time for women especially around their weight. To anyone seeing these f—— posts about Keto and 2 week weight loss, it’s water weight, not real fat loss, and take it from someone who did every diet under the SUN, the weight comes back thick and fast and then some as soon as you reintroduce carbs.”

“MOST HUMANS NEED CARBS,” she noted, before telling fans to “stay away” from fad diets. “If you really want to change your body to whatever, please do it for the right reasons, the right way, SLOWLY, not guided by some newfound Thinfluencer and their ‘fast weight loss’ guru/predator.”

“The Good Place” actress also included several screenshots of what appeared to be direct messages from fans, who shared their keto horror stories.

A couple of users claimed they needed their gallbladders removed as a result of being on the keto diet, while another person claimed their father got pancreatitis from keto. Another wrote that keto “f—– with their organs” and impacted their brain levels.

See more of the messages in the post, below.

In the post’s caption, Jamil noted that her post wasn’t aimed at any person in particular and also clarified that she’s “not a doctor.”

“This is directed not at any specific Thinfluencer,” she wrote. “It’s just been a particular January craze amongst them. I am not a doctor. I just know what I’ve been told by doctors. I have also included some of the messages from my followers also expressing concern. Some of them are health professionals some are not. Don’t take my word for it.”

Jamil continued, “Just read every medical journal article you can find on it. Learn the history of it, and if you fit that history, if you need it medically, I hear it can be extraordinary for certain serious health issues. But if not… you are needlessly risking creating health issues because our world not only obsesses over weight loss, but how fast we can do it. That is not sustainable and it’s designed to fail so that you stay on the diet merry-go-round forever. Sending love to you and your organs!”

“The Misery Index” host also added that she hopes people who recently gained weight will stop making fun of themselves and not refer to themselves as a “pig” or “elephant.”

“Ps. PLEASE can we evolve past the point of joking about how fat we got over Christmas/what a pig we are/how embarrassing our before pictures are…?” she wrote. “The only thing that is embarrassing is that we’ve been taught to not remember, that especially last Christmas, a lot of people didn’t have money to eat at all. If you did, then GOOD for you.”

“Let’s normalize gratitude,” Jamil continued, adding that “it’s not easy” to turn off the negative thoughts surrounding food. “It’s a gradual process of looking at food as a friend and hopefully not an enemy. It’s something I have tried and it helped me, I wonder if it may help you? But I promise you, using words like “pig” and “elephant” isn’t going to help anyone, least of all you. ❤️”

According to Healthline, the keto diet is generally safe for most people and has been shown to be an effective way to lose weight as well as lower risk factors for certain diseases.

However, some users have been known to experience what is called the “keto flu” when they first start out. This can cause flu-like symptoms, including diarrhea, constipation and vomiting. (Former “Real Housewives of Beverly Hills” star Tamra Judge said she decided to quit keto because she experienced “keto flu.”)

In addition, following the diet long term can possibly cause negative side effects, such as low protein in the blood, kidney stones, micronutrient deficiencies and extra fat in the liver.

Health professionals often recommend consulting your doctor before embarking on any new diet.