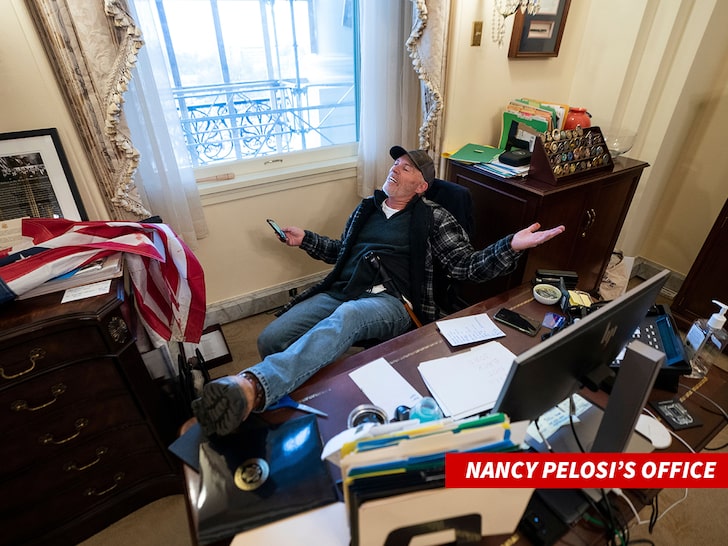 Cops have arrested the guy they believe is the Capitol rioter who was photographed sitting at Nancy Pelosi‘s desk during the failed coup … TMZ has confirmed.

Federal law enforcement sources tell TMZ … cops arrested Richard Barnett in Arkansas and charged him with entering and remaining on restricting grounds, violent entry and theft of public property. Barnett is believed to be the guy who was photographed inside the House Speaker’s office … with his feet kicked up. He also seems to be the guy taking a selfie with Pelosi’s mail and also left a note that read, “We will not back down.”

After getting into Pelosi’s office … Barnett reportedly told a New York Times reporter, “I wrote her a nasty note, put my feet up on her desk and scratched my balls.”

As we reported … the FBI asked for the public’s help to help them find the insurrectionists involved during Wednesday’s deadly attack. The FBI asked for “tips and digital media depicting rioting and violence in the U.S. Capitol Building and surrounding area.”

Barnett’s allegedly one of just hundreds of President Trump supporters who breached security and stormed the Capitol … triggering panic in the Senate and House Chambers before order was finally restored.

Pelosi’s laptop was apparently taken from her office. No word on whether classified documents were in the computer. Likewise, the laptop and iPad of Rep Jim Clyburn‘s was also stolen.

When the dust finally settled … 5 people died, including a U.S. Capitol Police Officer who reportedly died after a rioter threw a fire extinguisher at his head.