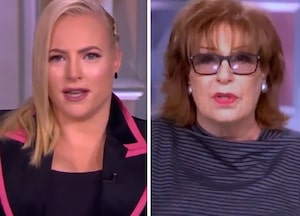 A producer later appeared on the show to downplay any tension, before Fox News Channel’s Janice Dean went off on Twitter.

Another day, another drama on “The View.”

Following Meghan McCain’s tiff with Joy Behar on Tuesday, the cohost had another awkward interaction Wednesday — this time with moderator Whoopi Goldberg.

The incident went down during an interview with Georgia’s Senator-elect Raphael Warnock at the very top of the show. McCain was the last of the cohosts to pose a question for the guest, repeatedly grilling him on his plans regarding “packing the courts.”

it’s only day 3 back 😬 pic.twitter.com/MWYBL5T8Am

“You talked a lot about unity on the campaign trail, and the need to unify the country, and unify Georgians, but progressives across the country are celebrating that the election could mean adding two states, eliminating the filibuster and packing the Supreme Court with more members,” she said, adding she was having a hard time believing in “the spirit of unity.”

“I want to know, will you do the same thing as Joe Manchin and agree not to follow up on all those things?” she asked. Warnock replied by saying he wasn’t focused on the issues McCain had mentioned, before she asked the same question again. He responded by telling her his constituents were more concerned about health care, relief packages and earning a livable wage.

When she tried to ask her question yet a third time, Goldberg shut it down.

“I am actually going to end this int … Hey, listen!” she shouted. “We’re gonna say thanks to the Senator-elect Raphael Warnock,” she said, before tossing to a commercial and making quite the exasperated reaction face.

Joy Behar Battles Meghan McCain on Second Day Back on The View: ‘I Did NOT Miss You’

At the end of the show, executive producer Brian Teta downplayed any drama between the two hosts — blaming technical errors, a delay and people “yelling in Whoopi’s ear.” He added, “No issues here, no drama here.” A source also told Fox News that they were simply out of time for the segment and had to end the interview early.

One Fox News personality who saw the incident, however, came to Meghan’s defense — and slammed what she perceived as a “hostile work environment” at the show.

“Everyone gets a view except @MeghanMcCain,” tweeted Fox’s meteorologist Janice Dean. “She just had a baby. It’s her 3rd day back. Instead of getting kindness, she walks back into a hostile work environment.”

“Why the reaction from @WhoopiGoldberg then?” she then asked. “Couldn’t been handled better.”

When a follower replied saying that technical issues and working virtually were likely at the heart of the incident, Dean added, “I work virtually every day with my team and I’ve never had any of my coworkers treat me like that.”

Dean previously defended McCain on Tuesday as well, after Joy matter-of-factly told Meghan she “did not miss” her during her maternity leave. 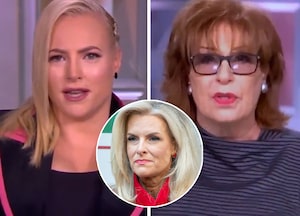