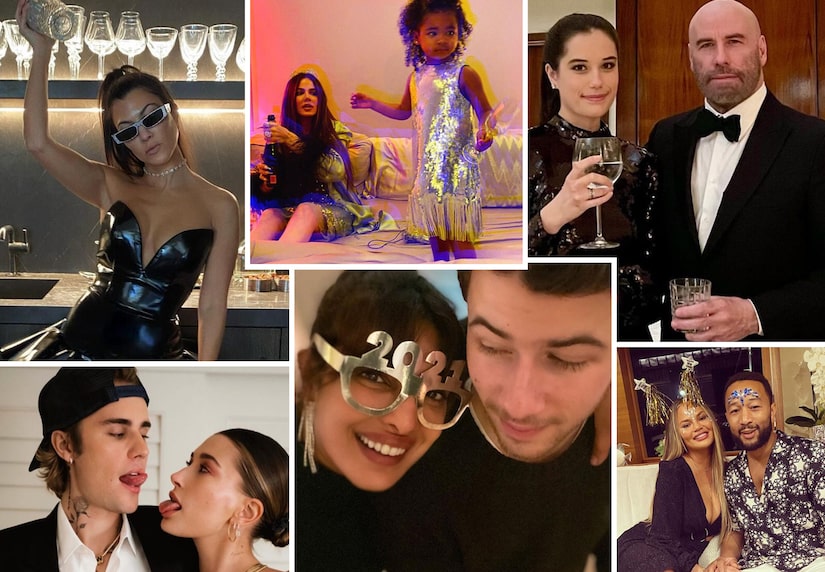 Cameos from Cameron Diaz and Mariah Carey had everyone talking.

Andy Cohen and Anderson Cooper had Twitter in stitches on New Year’s Eve, as they once again hosted CNN’s annual countdown from an eerily empty Times Square.

Saying goodbye to what Andy dubbed “a fecal year” — avoiding any S-bombs for the CNN censors — the duo started trending as soon as they threw back their first shot of the evening and kept the entertainment coming all night long.

From Anderson’s giggles to one headline-making moment with Mariah Carey, here’s what had everyone talking before the ball dropped.

Mariah hearing J.Lo in the background is the perfect conclusion to 2020 pic.twitter.com/kPngJ8SRqj

There was nearly another “I don’t know her” moment during the telecast when Mariah Carey appeared via satellite for an interview just before midnight. As she joined the two hosts, she asked them, “What’s going on in the background? I’m hearing music.”

Well, in the background was Jennifer Lopez, who was performing during Dick Clark’s New Year’s Rockin’ Eve 2021 with Ryan Seacrest. Cohen, likely trying to stir up some drama, told, her, “Yeah, we got J.Lo behind us actually” — before quickly changing topics. Carey didn’t take the bait and pushed right past the Lopez mention.

The feud between the two pop stars goes back at least 20 years, when Carey memorably said, “I don’t know her” when asked about Lopez during an interview. While Carey maintains she said it because, “I really was trying to say something nice or say nothing at all. I really was.” She also opened up about the source of their beef — without using Lopez’s name — in her book earlier this year.

Whatever appearance fee Cameron Diaz got for this CNN NYE hit where the hosts talked about falsely accusing her of pooping her pants, it wasn’t enough.

Introducing Cameron Diaz to the show, Andy told quite the story about how he once thought she defecated in her own pants at an Oscars party they both attended at Jimmy Fallon’s home.

Turns out, he had simply walked through dog poop and was trailing it through the house himself. After telling the story to both Cooper and the audience at home, Diaz joined them, with Anderson asking Andy if he wanted to apologize.

She confirmed he had already in the past, calling the situation “hilarious.” She added, “You should have seen the stink-eye he was giving me … like, literally, he was looking at me like, what did you do? What happened? Did you just poop your pants?!”

“Saturday Night Live” alum Cheri Oteri once again returned in character as Barbara Walters, cracking up the two hosts as she ran down the biggest news items of the year.

“Andrew, Anderson, once again, it has been a pleasure for you to have me on your alcohol-laced, pedestrian New Year’s Eve special during the apocalypse we call 2020,” she began, before shading Andy’s WWHL, talked about her celeb-packed Zoom sessions and even took aim at “Spanish conquistador” Hilaria Baldwin.

Anderson’s giggles were out of control.

“You are really not alone.”

“If it is one thing that Covid has taught us is that we cannot get through crises alone.” #CNNNYE https://t.co/7NIoJaibIf pic.twitter.com/jSh8HngR51

Anderson took a moment to acknowledge those watching at home who may not be in a celebratory mood on New Year’s Eve following a particular tough 12 months. Noting he himself used to hate the holiday because his late father was hospitalized around the start of the year before he died in January 1978, Cooper asked guest Stephen Colbert if he had any wise words for those who may be struggling.

“You’re really not alone. Of the the things we learned this year is that we need each other and that there is a need to collectively engage with each other and care for each other,” he said. “We cannot get through crises alone.”

“We’re never really alone … and hopefully, that is something we’ll take to the other side of this moment we’re in right now,” he added. “Is to pay attention to the people who don’t have somebody else to care for them or somebody else to be with them, because you might be that person in a moment.”

Throughout the hours-long show, there were a number of quick, blink-and-you-missed it moments that really made us LOL at home.

From Anderson squirming over Andy’s innuendo and “bossy bottoms” comments, to Cooper’s giggles, angry singing and reaction faces to their many shots, here are a few more miscellaneous musings to get your through New Year’s Day.

I watched every episode of Tiger King, Breaking Bad, Better Caul Saul, The Crown, Queens Gambit – yet with two hours left, this is the finest moment of television in 2020.

2020 mighta been garbage but at least we still have @andersoncooper’s reactions to shots #CNNNYE pic.twitter.com/sTSAcCY8UK

Snoop Dogg has Anderson Cooper in stitches with “Have you gotten high at…” and his manic giggle is infectious! 😂😂 pic.twitter.com/8g2006PVoP