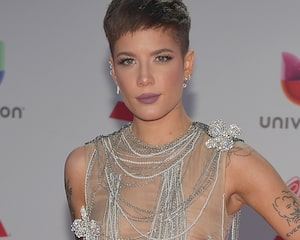 Halsey is taking some time away from social media after a spontaneous post in response to a viral challenge led to significant backlash and an apology.

The “Sorry” singer was among several celebrities getting involved with Instagram’s “Post a Photo Of” challenge, which leaves a blank prompt for people to fill out. In this case, Halsey got a prompt from one of her fans to share “you at your lowest point.”

In response, she shared a mirror selfie of her topless while she was struggling. The since-deleted image was captioned, “TW: ED, ask for help,” as noted by Just Jared. Halsey has spoken publicly about her struggles in the past.

“I would never want to harm someone who shares my struggle,” Halsey wrote as part of a subsequent apology after the initial post was met with significant backlash.

I am very sorry for posting a photo of myself depicting my struggle with ED without a sufficient trigger warning. I was very nervous to post it and didn’t think properly. I had positive intentions. I would never want to harm someone who shares my struggle.

“TW: disordered eating. I am very sorry for posting a photo of myself depicting my struggle with ED without a sufficient trigger warning,” she wrote. “I was very nervous to post it and didn’t think properly. I had positive intentions.”

Even in response to this apology, many of her followers kept piling on that she had not put a sufficient TW (trigger warning) before sharing that initial post, while others came to her defense.

This despite Halsey admitting that she was perhaps emotionally fragile and triggered at the moment of doing it in response to the prompt to target her lowest point.

According to the ongoing debate in the thread, Halsey had abbreviated her TW (which was on the picture itself) so as to not be flagged by IG algorithms for self-harm, but clearly it wasn’t enough for some people and the post was quickly removed.

with that being said im gonna log off now because this has turned into something I am not emotionally equipped to handle for the time being. I hope that’s okay 🤍

Even that isn’t proving enough, nor Halsey’s apology, and so she said she’s simply going to be stepping away from social media for a while.

“I’m gonna log off now because this has turned into something I am not emotionally equipped to handle for the time being,” she tweeted. “I hope that’s okay.”

Halsey has been very open about her mental health struggles, including bipolar, often asking for some grace from people on social media for anyone living with these and other health disorders.

“I have dedicated my career to offering education and insight about bipolar disorder and I’m so disturbed by what I’m seeing,” she wrote a few months back in a tweet. “If you can’t offer understanding or sympathy, offer your silence.” That sentiment certainly expands beyond just bipolar sympathy.