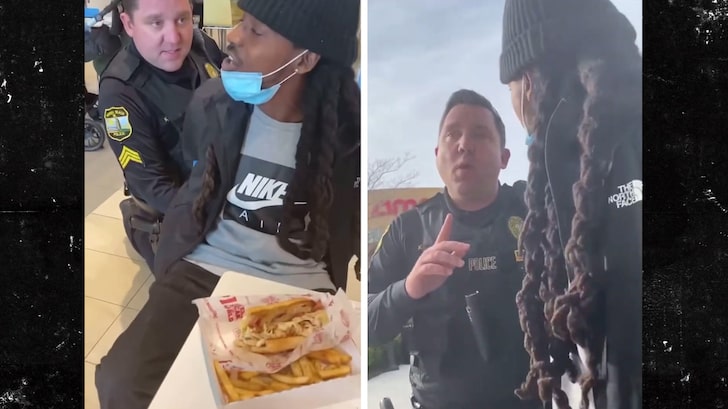 A Black man was yanked from his family and put in handcuffs in a mall because he matched the description of an alleged credit card fraudster … but cops had the wrong guy.

This happened Saturday at the Lynnhaven Mall in Virginia Beach, where the guy in question was in the food court with his family when, suddenly, a cop comes up behind him and slaps on cuffs — seemingly without any explanation other than to say he wants to talk outside.

The man and his wife, who recorded the encounter, were understandably pissed as cops walked him out of the mall in front of several other people — it amounted to a humiliating perp walk for the man … who, again, was NOT the guy cops wanted.

Eventually, the officer releases the man … who’s irate. His wife stuck around for an explanation, and it’s this — VBPD got a call about a Black man with dreads wearing all black using stolen credit cards … who was accompanied by a child wearing red. The real suspect was also driving a black truck, which the wife repeatedly notes they do not own.

Interestingly enough, while the cop explains all this … the wife pans the camera to her right and sees cops talking to another party with that same matching description. Long story short, the cop here jumped the gun and did apologize.

Too little too late though … the family is outraged, as they say the whole situation was handled incorrectly — cops didn’t ask questions or assume innocence, and instead treated him as the culprit immediately. As the pissed of man repeatedly yelled at the cops … this is why people are protesting for Black Lives Matter.

VBPD says it understands the family’s anger, and is looking into the incident to see if the officer’s actions were warranted — but also points out he was respectful throughout the incident.