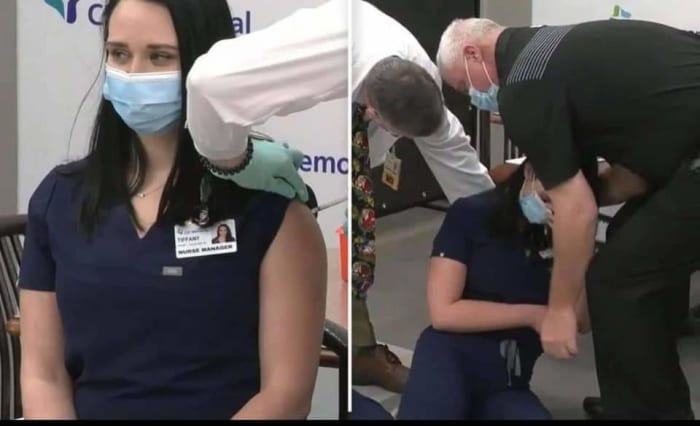 There’s a bizarre rumor going around social media that Tiffany Dover, the nurse who fainted after getting the COVID-19 vaccine, has passed away. But is there any truth to it? MTO News examined all the facts available.

Tiffany has become a lightning rod for the controversy surrounding the new COVID vaccine. Many people are suspicious about the vaccine – which has not been tested for long-term safety.

And when Tiffany fainted after getting the vaccine, that was all the evidence that skeptics needed to turn them against the possible life-saving vaccine.

Now many of those same vaccine skeptics are circulating a report that Tiffany died.

MTO News learned that the rumor started on Facebook when a person began sharing what appeared to be a death record of a woman named Tiffany Dover from Chattanooga, Tennessee showing that she had recently passed away.

The alleged death record came from the popular public records search, searchquarry.com. Here’s the post that has people talking:

When the rumors went wild, Tiffany’s employer, CHI Memorial Foundation, was forced to post a message on their Facebook page, saying that Tiffany was doing well. They quickly deleted that post, however, causing ever more rampant speculation:

So what’s the truth – is Tiffany alive or dead? MTO News tried to recreate the search – and locate the alleged “death records” to no avail. Our search turned up similar items, but there was no mention of death records on Tiffany.

So for now, it’s safe to assume that Tiffany is still alive. Let’s hope that she gets better soon.