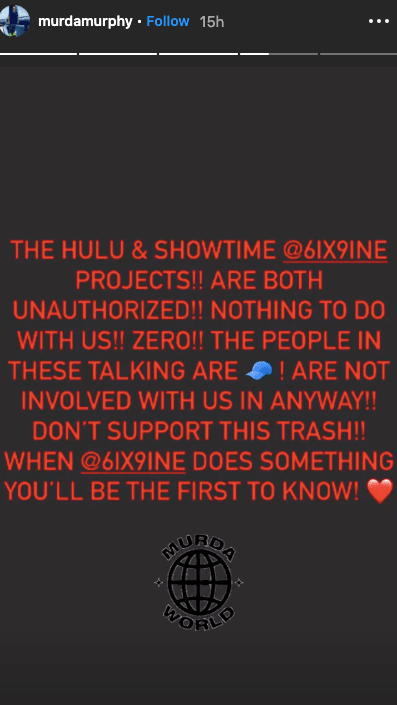 “THE HULU & SHOWTIME @6IX9INE PROJECTS!! ARE BOTH UNAUTHORIZED!!” Tekashi’s manager Murda Murphy wrote via Instagram Story. “NOTHING TO DO WITH US!! THE PEOPLE IN THESE TALKING ARE [CAP]! ARE NOT INVOLVED WITH US IN ANYWAY!! DON’T SUPPORT THIS TRASH!! WHEN @6IX9INE DOES SOMETHING YOU’LL BE THE FIRST TO KNOW!”

Hulu’s synopsis says that the project “unpacks the life of polarizing rap sensation and internet troll Tekashi69. One of the most controversial figures in contemporary pop culture, 69 repeatedly broke the internet with his sensationalist music videos and social media beefs before infamously testifying against Brooklyn gang the Nine Trey Gangsta Bloods in a landmark trial.”

We doubt Murda Muprhy’s words will persuade anybody not to watch the new doc.

You can peep the trailer for the Hulu doc, 69: The Saga of Danny Hernandez.

SHOWTIME’s Supervillain: The Making Of Tekashi 6ix9ine will be dropping in 2021.