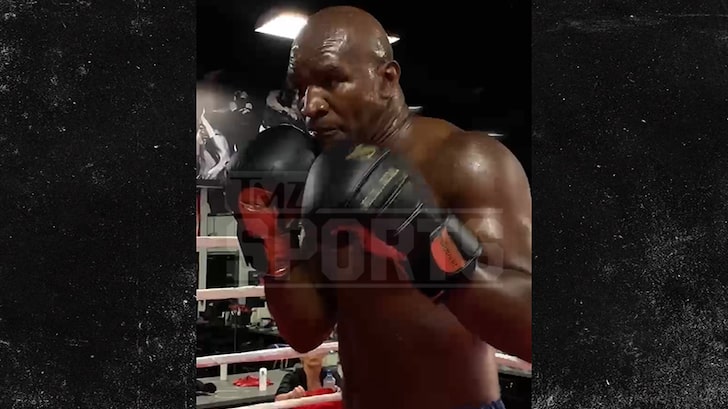 Evander Holyfield has a message for Mike Tyson — I WANT NEXT!

Here’s footage of 58-year-old Evander busting his ass at the Heavyweight Factory gym in Hollywood, FL — and we’re told it’s all in the hopes of getting a rematch with his old rival.

We’ve been covering Evander’s comeback for months — after Mike Tyson announced he would be returning to the ring, Holyfield followed suit.

Now, with Mike set to take on Roy Jones Jr. on Nov. 28 — we’re told Evander wants the next fight with “Iron Mike” … and feels confident he can win.

And, get this … our Holyfield sources tell us they believe Tyson is actually avoiding Evander.

One source put it this, “It’s not even about the money at this point, I think Tyson is scared.”

“We’ve offered multiple times and Tyson vs. Holyfield is the fight that should happen.”

Tyson and Holyfield first clashed back in 1996 at the MGM Grand in Las Vegas — where Evander dominated Mike in an 11th round TKO.

Everyone remembers the rematch in 1997 — the last time Evander had two intact ears.

Tyson was disqualified in the 3rd round for taking a few bites out of Holyfield’s lobes.

Years later, Tyson apologized to Holyfield and they became friends … but it’s clear, Holyfield is itching for another chance to punch Mike in the face.

Tyson has said he wants to continue fighting after the Roy Jones match — but hasn’t locked in any opponents.