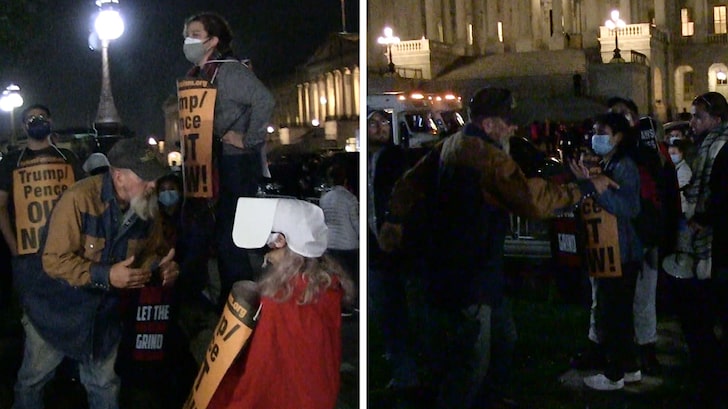 Amy Coney Barrett‘s confirmation to the Supreme Court is bringing out heated reactions — pro and against — which spilled onto the steps of the U.S. Capitol.

Tons of protesters — including some dressed as characters from “The Handmaid’s Tale” — showed up Monday night on Capitol Hill to rail against the third SCOTUS Justice nominated by President Trump.

Check out the video … things were pretty tense as one man — not wearing a mask — is getting into an argument that quickly turns heated. Another man with a bullhorn interjected, but that only amped up the rage. Police responded to separate the angry parties.

As we reported … Barrett was sworn in as the 115th Supreme Court justice in a ceremony at the White House. During her speech, she promised to carry out her duties independently from the presidency, congress and her own private beliefs.

But, it’s clear protesters are not confident ACB will keep her religious views out of her decision-making while on the highest court in the land … hence the protesters dressed as ‘Handmaid’s Tale’ characters.

Protesters gave Brett Kavanaugh the same treatment back in 2018.