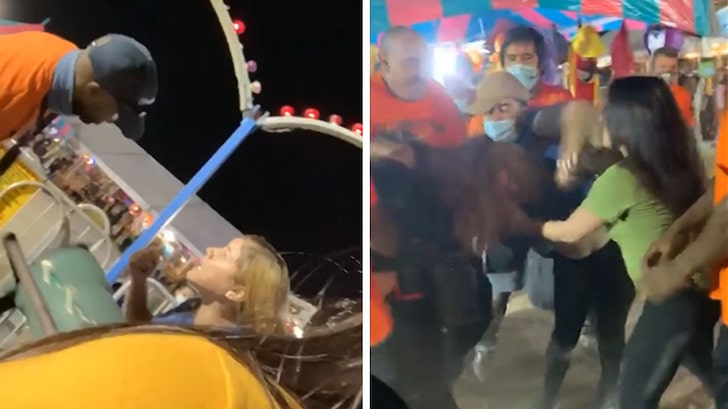 A Halloween-themed amusement park became a hellish scene full of monsters … engaged in an all-out brawl after a woman refused to get off a ride.

The chaos begins with a ride operator at one of the Halloween Town locations in Las Vegas telling a woman who’s yelling at him she’s gotta get off … and he’s not starting the ride until she does.

The woman — wearing a blue shirt, sitting next to a child, and called Christina by friends — doesn’t budge, and instead lets expletives fly. It’s unclear what actually led to her beef with the ride operator, but he holds strong … telling everyone the woman’s holding up the ride because she’s “acting like a damn animal.”

Her response arguably ventures into racist territory when she says he looks like an animal, and then she calls security on him as he’s trying to get everyone off the ride — and then tempers flared.

It escalates quickly, and soon there’s a scuffle involving several women, a few men, and multiple carnival employees who can’t seem to get it under control. It’s wild, it’s ugly and, yes … there were plenty of kids there to view the carnage.

Just your classic family trip to the pumpkin patch … in a horror movie, anyway.