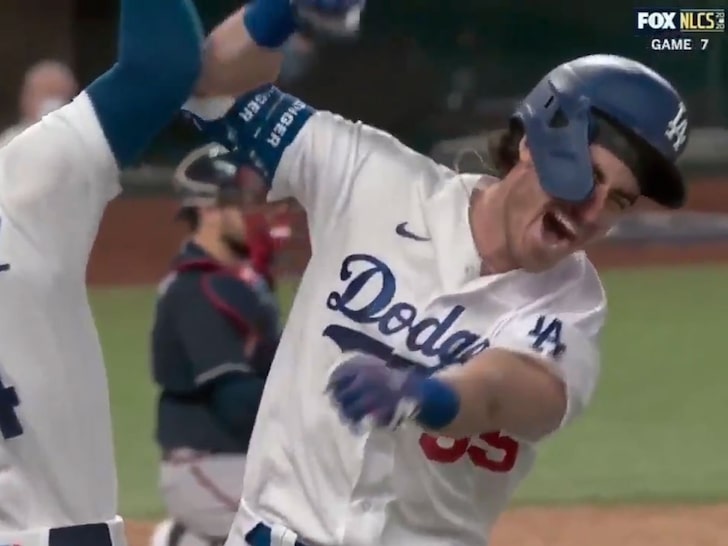 L.A. Dodgers hero Cody Bellinger confirmed what we were all thinking … he DID dislocate his shoulder while celebrating his game-winning HR on Sunday.

… but he popped it right back in and now he says he’s good to go!

25-year-old Bellinger smashed a solo donger in the 7th inning of the NLCS — giving the Dodgers a 4-3 lead, which ultimately was enough for L.A. to beat the Atlanta Braves.

After he crossed home plate, Bellinger shared a jumping forearm bash with teammate Kike Hernandez — and viewers could see, it appeared Bellinger suffered an injury during the celebration.

After the game, Bellinger confirmed it was a dislocation of his right shoulder.

“I hit Kike’s shoulder a little too hard and my shoulder popped out,” Bellinger told MLB Network.

The Game 7 hero for the @Dodgers! @Cody_Bellinger talks about his game-winning HR and what happened to that shoulder. #MLBTonight pic.twitter.com/xQ7501E81P

“So, I had to go back in the training room. They popped it back in and I was ready to play some defense. It kinda hurt!”

Bellinger reported that he’s “good” now — and Dodgers fans are praying the shoulder won’t bother him in the World Series.

In the meantime, Belli says he’ll celebrate with his OTHER arm moving forward.

As for Kike, he told reporters after the game — “Now Belli knows not to mess with people who are way stronger than him!”