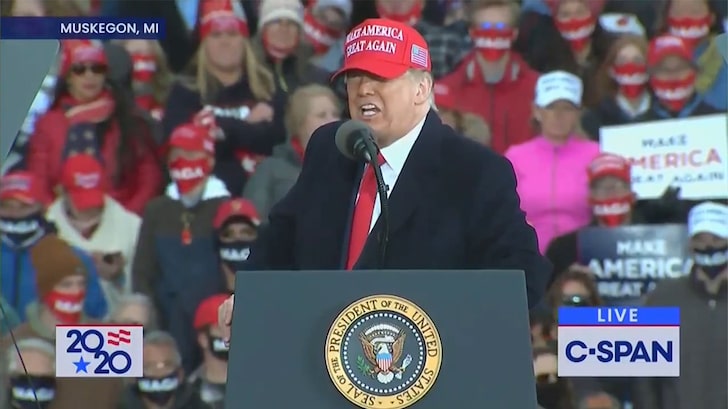 President Donald Trump gleefully told a crowd at a Michigan rally Saturday night … it puts a smile on his face to see police push around protesters.

Trump told his cheering supporters there is “something very beautiful … watching everybody get pushed around,” referring to the way the National Guard responded to protesters in Minneapolis following the death of George Floyd.

Trump gloated his comments were not “politically correct” but then dog-whistled to the crowd … “You people get it; you get it probably better than I do even.”

But, Trump wasn’t done … he went after Governor Gretchen Whitmer, who was the target of a right-wing kidnapping plot that many think Trump himself inspired with talk of liberating Michigan.

Trump brushed off the plot — mocking the Governor by saying, “They said she was threatened” — and groused that Whitmer partially blames him for the terror plot. The crowd loved it, chanting, “Lock her up.” Trump seemed pleased.

Whitmer didn’t wait for Trump to finish his speech, tweeting, “This is exactly the rhetoric that has put me, my family, and other government officials’ lives in danger while we try to save the lives of our fellow Americans,” she wrote. “It needs to stop.”